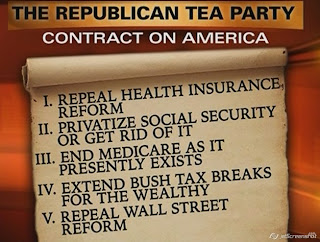 Running on nothing!!! Is this the precursor to a do nothing Republican congress and state legislature? Remember when dismantling all the Clinton era policies was Bush's idea of progress, and that resulted in blowing away surpluses as far as the eye could see? So what would happen under policies already a part of the GOP agenda?

Newsweek notes that nothing is apparently more important to Republican politicians these days than jobs and the budget deficit, but there’s a problem with their message: “So far, the things that Republicans have said they want to do won’t actually boost employment or reduce deficits. In fact, much the opposite. By combing through a variety of studies and projections from nonpartisan economic sources, we here at Gaggle headquarters have found that if Republicans were in charge from January 2009 onward — and if they were now given carte blanche to enact the proposals they want to — the projected 2010-2020 deficits would be larger than they are under Obama, and fewer people would probably be employed.”

If you're curious, check out this summary look at how they came to what seemed like an obvious conclusion.

The math is pretty straightforward. Let's start with the deficit. According to the Congressional Budget Office, Obama's stimulus plan is projected to increase budget deficits over the next decade by $814 billion. But Republicans opposed the legislation The Obama deficit: $814 billion. The GOP
deficit: $0.

Next up is health-care reform. Obama passed it; Republicans want to repeal it "lock, stock, and barrel." Just this Tuesday the CBO released a letter saying that Obama's health-care-reform legislation would "reduce the projected budget deficit by $30 billion over the next 10 years,” while repealing the law would generate "an increase in deficits ... of $455 billion ... over that [same] period." Factor those figures into the equation and the Obama deficit falls to $784 billion. The GOP deficit, meanwhile, rises to $455
billion.

The Bush tax cuts. Obama wants to extend them for the 95 percent of taxpayers Republicans want to extend them for everybody. According to data compiled by The Washington Post, "the Democratic proposal would add about $3 trillion to the deficit during the next decade, while the GOP plan would cost $3.7 trillion." That brings the total Obama deficit to $3.784 trillion over 10 years, and its GOP counterpart to—drumroll, please—$4.155 trillion.

On jobs Republicans have only said they'd … scrap the stimulus, and extend the Bush tax cuts … so as not to (in Boehner's words) "impose job-killing tax hikes on families and small businesses." In a report out this week, the CBO estimates that between 1.4 million and 3.3 million fewer people would be employed right now if the American Recovery and Reinvestment Act had never made it through Congress. Split the difference, and the pro-stimulus Obama moves ahead of the anti-stimulus GOP by about 2.35 million jobs.

The Brookings Institution has noted, that "of 11 potential stimulus policies the CBO recently examined, an extension of all of the Bush tax cuts ties for lowest bang for the buck." In fact, "letting the high-income tax cuts expire and using the money for aid to the states, extensions of unemployment insurance benefits, [or] tax credits favoring job creation ... would have about three times the impact ... as continuing the Bush tax cuts."

If keeping the top marginal tax rate at 35 percent—the rate under Bush, and the rate that Republicans are fighting to preserve—spurs so much hiring, why didn't America experience any job growth at all during Bush's time in office? And if a top marginal tax rate of 39.6 percent—the rate under Bill Clinton, and the rate that Democrats are fighting to restore—is such a job killer, why did payrolls grow by 20 percent during the 1990s?

The bottom line, then, is that recent GOP proposals would produce fewer jobs and far larger deficits than the plans Obama has already passed or currently wants to pass.