For a Job that pays under $180,000 a year, Sen. Candidate Linda McMahon must be spending $50 million for shear political power. What other reason? 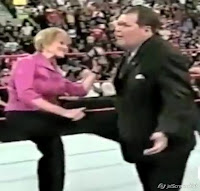 HARTFORD, Conn. (AP) Former World Wrestling Entertainment CEO Linda McMahon, a political newcomer, has spent more than $20 million flooding voters' TV sets and mailboxes with ads to boost her name recognition and secure the GOP nomination, and has said she'll spend as much as a total of $50 million of her own money on the race.

And Blumenthal has seen his lead over McMahon shrink in the polls. A Jan. 14 Quinnipiac University poll showed Blumenthal leading McMahon64 percent to 23 percent. By Aug. 4, that had narrowed to 50-40, with Blumenthal still hanging onto the lead.