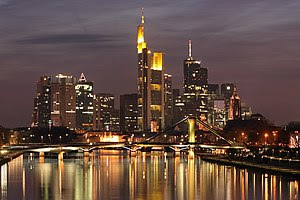 Image via Wikipedia Americans don’t want to be anything like socialist Europe. And we’re not:

The German economy grew by 2.2% in the three months to the end of June, its fastest quarterly growth in more than 20 years, official figures show. In the US, however, second quarter growth was 0.6%, down from 0.9% between January and March. "Such quarter-on-quarter growth has never been recorded before in reunified Germany," the national statistics office, Destatis, said.

Why is German doing so well? They have a national manufacturing policy.

The main reason for the higher-than-expected growth was strong exports … the office said household and government spending also helped to boost growth in the second quarter. "The German economy mainly benefited from two factors - a catching up in the construction sector after the harsh winter and strong foreign demand for German goods."

Germany is Europe's largest economy and the world's second largest exporter behind China.

German manufacturers use many components from eurozone economies, helping them to grow, while strong demand for German products overseas is a sign that global economies are recovering.

Parts and goods are made in Europe, boosting the economies of all members. Wouldn’t it be interesting if the states in this country purchased components and goods from each other, instead of importing cheap parts made by cheap labour.