The whole “Mosque at Ground Zero” controversy…isn’t one, unless you don’t believe in the First Amendment. Does that hurt your feelings? 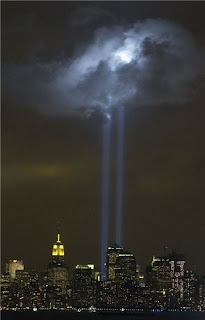 And I thought the “death panel” debate, stoked by the media and created by the twisted, dopey conservative brain trust, was the ultimate in intellectual dysfunction.

Never one to seize the moment, President Obama primed the primordial pump by waffling on something so simple, so democratic, and so constitutional:

President Barack Obama told CNN that in defending the right of Muslims to build a community center and mosque near ground zero … he was "not commenting on the wisdom" of the project.

This is red meat for opponents who feel less constitutional and more “hurt” over the trumped up issue:

Rep. Peter King said … "It is insensitive and uncaring for the Muslim community to build a mosque in the shadow of Ground Zero.”

I guess that’s why it’s insensitive to build a mosque in Tennessee, Wisconsin, and California too.

It appears the president “has chosen to declare our memories of 9/11 obsolete and the sanctity of Ground Zero finished," even in the other "sensitive" areas of our country. That by the way was a quote from the bat crazy sounding group calling itself “9/11 Families for a Safe & Strong America,” whatever that’s supposed to mean.

These “hallowed ground” Christian idol worshippers should get the media cold shoulder until they grow up and act like adults, instead of fearful foot stamping children they want to be, seeking to put the media spotlight on their hurt feelings.

But if a poll were taken today, it appears a huge number of Americans would vote against the First Amendment:

Nearly 70 percent of Americans oppose the plan, according to a CNN/Opinion Research Corporation Poll released Wednesday.

Take it from victocrat Sarah Palin, who weighed in with this important tweet:

"We all know that they have the right to do it, but should they?"