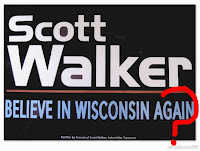 For a guy who wants to control the intricate dealings of state government, he sure looked clueless when asked about illegalities in his own campaign.

Asked if he was surprised by the timing of the probe, Walker said: "I can't be surprised by something I don't know about." A longtime aide to Milwaukee County Executive Scott Walker had his work computer seized by authorities last week, sources familiar with the situation said Monday. Those sources said the computer was removed Friday while Tim Russell - the county housing administrator and a former Walker campaign aide - was away from his office. Assistant District Attorney Bruce Landgraf … refused to respond ... "I have absolutely no comment," said Landgraf, who typically handles cases involving election and campaign fraud.

Russell, 47, used to run former Gov. Tommy Thompson's Milwaukee office and has been with Walker since he ran for county executive in 2002.

Walker tried to act doe-eyed about a possible illegal act by an aide who had his computer seized.

Whatever it might be, Walker said he can't be considered out of touch for not knowing that one of his aides had his computer seized as part of a criminal probe.

"I've been busy on other things," he explained.