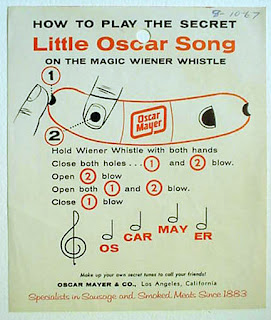 In a state where it’s common place to see the Oscar Mayer “Wiener-mobile,” who would have thought that some people might be offended by the "w" word. We live in a time where an offer of the unmistakably phallic food could mean your job:

The former dean of a Janesville charter school has been reassigned jobs as the result of an investigation into whether he made a sexual comment at a picnic for students.

This could be explosive stuff if saying “wiener,” instead of hot dog in public, was offensive.

Hey Beavis, they said "wiener." heh, heh, heh. Yes, it was THAT “word” folks. Thank god no Oscar Mayer “Wiener” packages were around any children at the time...or were they?

Lindau was placed on administrative leave from May 11 to May 17 during the investigation. According to the report, an employee and about 15 students were in line to get a hot dog at a May 6 picnic for charter school students. Lindau held a hotdog with grilling tongs, pointed toward an employee's plate and said, "(Name redacted,) you want a wiener?" according to the report. About seven students giggled and commented, the report states.

Even the following little twist in this story, most likely unrelated, still doesn’t come close to the over reaction by the district.

The employee also showed district officials a May 5 e-mail from Lindau to the employee in which Lindau wrote the phrase "your place or mine?"

What, no mention of the “wiener?”

The employee "felt both of these situations had sexual connotations that made the employee feel very uneasy around" Lindau, the report states. Lindau told investigators he did say "wiener" but had no negative intent. He was unaware of any negative student reaction, he said.

Isn't it time we start reviewing any films, video tapes, or transcripts, of "Little Oscar's" personal appearances, where little children gathered? What's next, the condom bun (my idea)? Check out the following stories below, all with the "forbidden" word.