We, the Coercive People, do ordain-the Mosque must be stopped!! 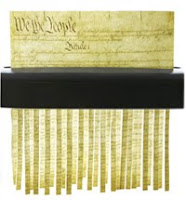 Judging by the success of the conservative party’s ability to change the national dialogue from the Great Recession and jobs, to the horrors of a mosque near Ground Zero, they will have no trouble inserting "coercion" into our constitution. In fact, they already have, which should send a shiver through every American. The force of public opinion will coerce individuals to act against their own constitutional rights and guarantees. When you can do that, you can kiss this nation goodbye.

AP: Republicans called it the "9/11 Mosque" and the "Ground Zero Mosque," falsely describing it as if a place of worship were being built in the crater left behind when the Twin Towers crumbled. From statehouses to state fairs on Tuesday, Republican incumbents and challengers unleashed an almost unified line of criticism against the president days after he forcefully defended the construction of a $100 million Islamic center two blocks from the site of the 2001 terror attacks.

The First Amendment should have prevented the mosque controversy from ever happening, and that’s why this is so frightening. It’s all about the mob mentality of the so called “Constitutional conservatives.” Their attitude: If you give up your rights for the greater good of public opinion, America will be grateful.

Republican candidates around the country seized on President Barack Obama's support for the right of Muslims to build a mosque near ground zero, assailing him as an elitist who is insensitive to the families of the Sept. 11 victims.

"He is thinking like a lawyer and not like an American, making declarations without America's best interest in mind," said Andrew Harris, a Republican running for Congress in Maryland.

Republican congressional candidate Jim Renacci, "Just because we may have the right to do something, doesn't necessarily make it right to do it."

“Well I think it's another example of him playing the role of law professor. ... We can have a great debate about the legal arguments. But it's not about that," Minnesota Gov. Tim Pawlenty said on Fox News.

GOP Senate candidate Carly Fiorina told reporters that the issue was not about religious freedom. Rather, she says it is about being sensitive to those who suffered in the Sept. 11 attacks.

In Illinois, Republican Rep. Mark Kirk said he respects religious freedom but suggested the Islamic center be built at a "less controversial site."

It appears we all have constitutional freedoms, just not the ones that might offend the great protectors of our founding document.