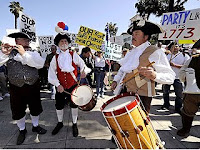 The First Amendment protects religious freedom. It protects religion from government action to limit that freedom. Yet the disconnect that conservatives have, the same ones protecting our founding document by dressing up in three pointed hats, is stunning.
Sen. Candidate Ron Johnson is just fine with the government stepping in (shall make no law…prohibiting the free exercise thereof) to stop the NY mosque from being built. You would also have to believe those Muslims are out to “poke a stick in our eye.”

Journal Times: It would be "incredibly unfortunate," if a mosque was built in New York City blocks away from Ground Zero, the U.S. senate candidate Ron Johnson said Friday when asked at a Journal Times Editorial Board meeting.

Ron Johnson: "Those folks are trying to poke a stick in our eye," Johnson said. "I just hope the zoning officials and the city, the state revisit that, rezone that piece of property. If they don't do it I hope the construction workers in New York show their outrage and say we are not going to do that."

Sen. Russ Feingold: "I do not decide for Muslims where they want to buy property and have a religious facility any more than I do for Christians or anybody else," Feingold told the editorial board Tuesday. "That clearly is not my role."