I don't want to see anyone unemployed, ever, but I am so tired of seeing this story...

Jsonline: Harley-Davidson Inc. may move its Milwaukee manufacturing to a plant 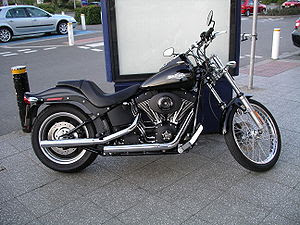 Image via Wikipediain Kansas City, Mo., if the company cannot reach an agreement with its labor unions here, a company spokesman confirmed Friday. Harley-Davidson has said its goal is to cut millions of dollars in costs from its Wisconsin operations that employ about 2,000 people.

Then, motorcycle assembly would be moved from Kansas City to a Harley-Davidson plant in York, Pa.

It was insulting enough for the state GOP to have their convention at the Harley Museum, but now conservative crazy Harley-Davidson wants to take their long history in Wisconsin and throw it under the wheels.

If Harley moves, I'm hoping buyers will say good-bye to these anti-blue collar, low wage, race to the bottom conservatives.

Labels: Harley-Davidson
Email ThisBlogThis!Share to TwitterShare to FacebookShare to Pinterest