We're seeing more and more Democrats finding the courage to come out of their shell, and call out the Republicans on their over the top hypocrisy and flim-flam ideas for America. It's new to the news media outlets. No one knows how to react to it, except to say that it's seen as partisan bickering from "both sides." Despite the fact that liberal criticism is reality based, loaded with specific examples, many are comparing this offensive with right wing fictions and fear mongering.

Take for instance this long overdue comparison from Keith Olbermann on Newt Gingrich's accusation that Obama is a socialist. He warns us of a government that knows what's best for America, and is dictated from liberal intellectual elitists. It's conservative "projection" of their own authoritarian tendencies, of course, where they dictate to the rest of us what makes us God fearing, down home simple everyday freedom loving Americans. 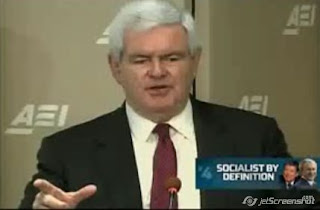