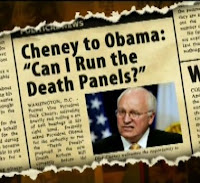 The new figures below showing just how fast health care costs are skyrocketing should shut the chattering Republican filibusterers up for good, but sadly won't. If they had any shred of credibility, and I don't believe they do, reform opponents would change their position in flash. Hey guys, the spending referenced below is coming out of our pocket:

"In a stark reminder of growing costs, the government has released a new estimate that healthcare spending grew to a record 17.3% of the U.S. economy last year, marking the largest one-year jump in its share of the economy since the government started keeping such records half a century ago," the Los Angeles Times writes.

For all the hue and cry over a government takeover of health care, it's happening anyway.

Federal and state programs will pay slightly more than half the tab for health care purchased in the United States by 2012, says a report by Medicare number crunchers released Thursday.

That's even if President Barack Obama's health care overhaul wastes away in congressional limbo. Long in coming, the shift to a health care sector dominated by government is being speeded up by the deep economic recession and the aging of the Baby Boomers, millions of whom will soon start signing up for Medicare.

The report serves as a reality check in the debate over Obama's health care plan, which has been dominated by disagreements over how large a role government should play. Richard Foster, Medicare's top economic forecaster, said the recession has only worsened the two stubborn problems facing the U.S. health care system, lack of insurance coverage and high costs. "All that argues that some form of health care reform is a good idea," Foster said.

There seems to be little chance that the balance will tip back decisively in the direction of private financing, with the Baby Boom generation signing up for Medicare and the lack of health insurance at many new jobs.

How disfunctional are Democrats? They still lack the motivation to push through change, even after going the brutal one year distance that has alienated their base, and proved they lack the ability to manage government. R.I.P.
Posted by John Peterson, Democurmudgeon at 2/04/2010 09:09:00 AM