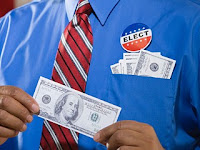 On with the show! In fact, it's all show.
The Republican Party is skin deep with meaning. Take the time to notice what they look for in an effective leader. Appearance and talk mostly.
Remember when they complained Obama didn't "talk" enough about terrorism? He didn't "seem" concerned with high unemployment.
Republicans are offering Americans a choice in November, and it's all show. Margaret Carlson, a Bloomberg News columnist, wrote:

Republicans insist they are not simply the Party of No. They are the Party of Plans. At presidential addresses, Republicans hold up sheets of paper with their plans. At House Republicans’ session with President Obama last week in Baltimore, every other question was about their unappreciated plans. To their surprise, Obama recited some of their so-called plans back to them -- such a disturbing turn of events that Fox News cut away to resume its regularly scheduled programming.

Obama observed … You can’t just wish something into being, like the heading in their “No-Cost Jobs Plan” that reads, “Tear Down Self-Imposed Obstacles to Economic Growth.” In other words: Clear-cut pesky regulations … We might die, but we’ll be more competitive.

When that $787 billion bill passed a year ago, Republicans trashed it, not just refusing to acknowledge that it averted a depression but claiming it hadn’t saved or created one job. Rep. John Boehner claimed there hadn’t been any projects in his home state of Ohio -- until his hometown newspaper uncovered $52 million. Embarrassingly, a Republican sheriff from Boehner’s own district went on CNN to declare his gratitude: “The stimulus is working for me here in Butler County because I am keeping my deputies and I am not having to lay them off.”

At the Baltimore Q&A, with some dramatic flair, Republicans presented Obama
with a booklet designed …“Better Solutions” … the booklet is a smorgasbord of more broad, diffuse language that can’t be analyzed by experts, or translate into legislation.

Five of the 13 items were already in the GOP health care alternative, previously considered by the CBO, which Republicans swear by, (which) said this Republican alternative would have helped only 3 million people secure coverage and cut costs by only $68 billion over 10 years. (and increased the number of unisured to 52 million) The Democratic bill covers 36 million more people, trims the uninsured population to 4 percent of Americans and narrows the deficit by $104 billion.