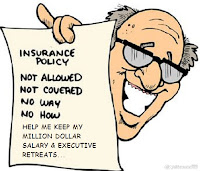 Insurance rates skyrocketing to 39 percent is now somebody else's fault:

AP- Angela Braly, president of WellPoint Inc., blamed the increases on the growing price tags for hospital care and pharmaceuticals. "Raising our premiums was not something we wanted to do," Braly said. "But we believe this was the most prudent choice."

Blaming the actual health care providers is not the only thing the insurance industry is doing, they're:

…purging its sickest customers while spending millions on exorbitant salaries and retreats for its executives, congressional Democrats said … the House Energy and Commerce Committee, said at a hearing on WellPoint Inc. that his panel's investigators had received internal company documents showing that in 2008, 39 company executives received salaries of $1 million or more. And in 2007 and 2008, it spent $27 million for 103 executive retreats.

If you're a Republican, how can you defend this market based inhumanity, and still sleep at night.
Posted by John Peterson, Democurmudgeon at 2/24/2010 12:59:00 PM