Texas Candidate for Gov. Debra Medina: Pro Life, Pro Gun, Pro Property. Who Knew it was so easy to solve the nations problems? 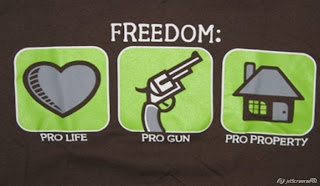 There are three Republicans running for governor in Texas, and it's crazy to what lengths each one will go to prove how far right they can paint themselves. One candidate is starting to stand out of the "mad dog" pack.

“I think some very good questions have been raised in that regard,” she said. “There’s some very good arguments, and I think the American people have not seen all the evidence there.”

After Gov. Perry and Sen. Hutchison pounced at the suggestion, Medina claimed she was ambushed by Beck and her opponents. It was the classic GOP "I'm a victim" comeback. "The question surprised me because it's not relevant to this race..."

All of this has earned Medina double digit support and a chance to knock Sen. Hutchinson out of second place. Sound policy and solutions are not the answers we're looking for.

NY Times: Medina comes across as an ideologue, not a political pragmatist. On the stump, she talks a lot about freedom, and she says that to her, freedom rests on private ownership of property and the right to bear arms. “Are we going to elect people that understand freedom, or are they, in their zeal to protect us, going to destroy those very pillars of freedom?” she asks.

While every Republican in good standing has taken a pledge never to raise taxes, especially the sales tax (where many have proposed sales tax holidays), guess what tax passes the GOP test?

Ms. Medina has promise(d) to abolish property taxes, which she regards as an “assault on liberty,” and replace them with a sales tax … it requires sales taxes of up to 15 percent. “I am not a crazy person,” she said. “I know we have to fund government.”

Wealthy McMansion owners have just found their candidate. But on the sales tax side, consumers will be flocking to border states or the internet to save themselves some money. Don't forget guns:

Gun enthusiasts love her opposition to all federal gun laws. She won many over when she lamented in a recent debate that current law did not allow her to take her pistol, which she keeps in a zippered case in her car, into the grocery store.

(She would) deploy the Texas National Guard along the border with Mexico. the federal government has usurped power from the states and that Texas should be able to nullify federal laws and regulations it deems unconstitutional. Her first target would be the Environmental Protection Agency, she says. “We will tell the E.P.A., ‘You have no authority here.”

Medina's vision for America fundamentaly changes our nation to a destablized go it alone accident waiting to happen.

Video is there despite black screen: