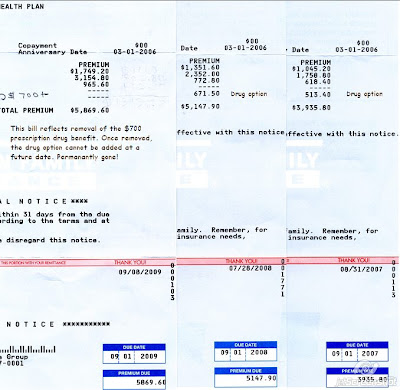 Republican Rep. Dave Camp touted the small premium increases for health savings accounts. Complete bullshit. I've had an HSA for 8 years, and it's really expensive. My increase was over 30 percent, not one percent or less as Camp offers up here.
Rep. Camp said HSA accounts DECLINED for families, and had the guts to say in front of the American people and president. Do the math on the picture to the right, with three years of HSA premium increases, and tell me how they declined.

By my calculations, in five years my premiums would be over $1000 month, with a $10,000 deductable (my plan before I dropped coverage completely). The newer bill on the left would have been $700 more, but the prescription plan was dropped to reign in the monthly cost. Click on picture to enlarge.
That's some "decrease." 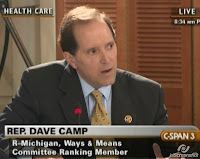