Flying planes into buildings is just one "inappropriate" way to protest the evils of big government. It's okay, really. Suicide protester Joe Stack at least made his point.

First a recap of a previous Democurmudgeon post: "The pilot was identified as Andrew Stack. The IRS has offices in the building complex that was struck. Federal officials said shortly after the crash into the Austin office complex that houses FBI and IRS offices that they had no reason to suspect the incident was terrorism related."

Asked if he considered her father a hero, she said "yes." She spoke in a telephone interview from Norway, where she lives.

By the way, you won't believe why Samantha Bell moved to Norway…government health care benefits. Check out this bizarre twist near the end the video clip, it's the ultimate in hypocrisy.


Video is there, despite black box, click start button. 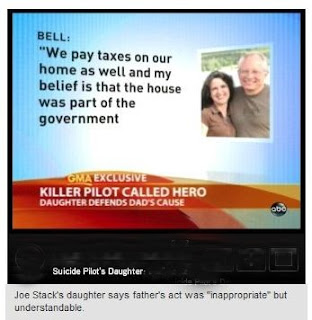 "The daughter of (Joe Stack) is calling her father a hero. Samantha Bell, tells ABC's "Good Morning America" the plane attack was "inappropriate." But she praised his anti-government and anti-tax views. Bell says her father was not a hero for taking a life, but "because now maybe people will listen."

Stack targeted the IRS office building in Austin ... killing employee Vernon Hunter and himself, after posting a ranting manifesto against the agency.

"The only difference he made was he took away from my family and murdered a 20-year U.S. Army vet," Ken Hunter said."