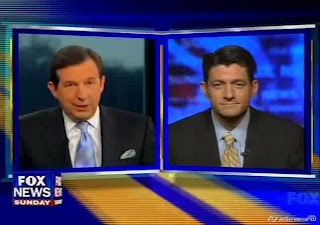 2. Lie 2 uncovered, as Wallace quotes verbatim from the CBO report disputing Ryan's claims that health care cost will increase. For some reason the CBO missed the "double counting of savings" and mistakes that only Ryan could see, or misinterpret for the American public (play clip below).

3. This time tort reform is revealed to be a non-issue when it comes in at .05 of total spending. Defensive medicine has two problems; to many tests to avoid making a medical error, and ordering tests to pad the bottom line of costly medical centers. The latter issue is rarely mentioned because Republicans are the political arm of the insurance industry. The even bigger solution is to Tort reform is this: right now it penalizes victims, and doesn't do anything about the 98,000 people who die in hospitals each year as a result of preventable medical errors, costing the health care system $29 billion in excess costs. Start at the front end, not the back. If you lower medical errors, you lower lawsuits. Easy isn't it. Not for Paul (play clip below):

4. Chris Wallace nails Ryan on pre-existing conditions. Ryan's concept runs counter the original business model of insurance (not their current model of exclusionary death panels), and that is to spread the risk by insuring everyone, with the more healthy contributors supporting the chronically ill. Ryan's plan is a nightmare, soaking taxpayer with the high cost of high risk pools that get ever bigger, as insurers dump their coverage to pad their profits. Socializing risk, privatizing profits (play clip below).