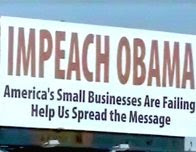 One year into his administration, with no new taxes and small business tax breaks piggybacked with possible health care reform, who would have guessed the end of America was so near. Driving off the economic cliff, tanking the global free market system and leaving a $1.2 trillion deficit for the Obama administration didn't ilicit a peep out what are now tea party protesters.

Now we're getting for the first time, billboard stupidity. First up, impeachment.
Video is available despite black screen, click to see

A company represented by a Menasha lawyer has rented a billboard calling for President Barack Obama's impeachment.

It was paid for by an unnamed company represented by Tom Wroblewski. In a memo to the media Monday, Wroblewski said the company’s sentiment is that Washington politics are bad for small businesses. He says despite the billboard's language, he's not suggesting Obama committed an impeachable offense.

"The billboard is not meant to allege any impeachable offense has been committed; It is simply an expression of frustration by my client that politics in Washington should change to better support small businesses,” Wroblewski said in a written statement.

Out of the Minneapolis City Pages-Update:

The Post-Crescent says Wroblewski is distancing himself from the billboard's message after getting angry phone calls: "It is nothing personal for my dad or me," Wroblewski said. "It is a limited liability company that our firm represents. The company chose the location of the billboard and chose the language."

What's up with the Obama haters and billboards? As we told you, businessmen Mike Rivard and Randy Nugent have been revealed as the sponsors behind the billboard in Wyoming, Minn., that shows a smiling former President George W. Bush, accompanied by the words "Miss me yet?" They evidently miss the guy who presided over the nation's housing and banking sector implosions and spent two terms burying Bill Clinton's federal surplus under a mountain of red ink. Now this. Weird.