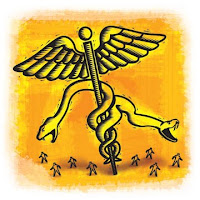 Politico did an amazing "protect the Republican" piece denouncy criticism of anything "legitimate" coming from the right wing, no matter how draconian the legislation. Gee, it has numbers, theories and reduces federal spending, so what's not to like?
Maybe if such a proposal drops unimaginable costs onto seniors, who will then have to self ration life sustaining assistance, that should give you pause or at least turn your stomach just a little.
For Politico it's okay to create a "grassroots" tea partys, brutally criticizing Obama's campaign for change, but if anyone dared dissect honestly Ryan's Dickensian road map it's some evil orchestrated plot. Check out their own words:

Republicans believe the criticism was a setup. Rep. Devin Nunes, an ally of Ryan’s and a collaborator on the plan, said the Democrats’ playbook was obvious: Obama elevated Ryan’s plan in order to methodically break him down. Democrats dismantled the road map point by point over the past week, framing it as a radical shift back to George W. Busheconomics.

Yes, point by obvious point the plan shifted costs, or in republican lingo "indirectly taxes" seniors on fixed incomes and failing health, by reducing federal spending. The bills still have to be paid, but that's a minor detail. Politico continues to make legitimate GOP excuses for Ryan's brutal plan for rationing.

"…rather than opening a hopeful new avenue for bipartisanship, the White House and Hill Democrats quickly went to work ripping apart Ryan’s “Roadmap for America’s Future” … Democrats accused the Wisconsin Republican of trying to privatize Social Security, cut taxes for the rich and increase them for the middle class. Medicare would be allowed to “wither on the vine.” “This is part of the Democratic process,” OMB Communications Director Kenneth Baer said. “The tone around this town is that people want and deserve and expect some substantial debate on this proposal.”

But Democratic criticism is partisan, even if they're right.

On Capitol Hill, Office of Management and Budget Director Peter Orszag deconstructed the plan, saying it would address long-term fiscal problems but in a way that many policymakers might find “objectionable” because it would shift risks and costs onto individuals and their families.

For Politico this obvious cost shifting poses no identifiable problem. Why should it, especially when such inhumanity is coming from a policy wonk like Ryan? He's a "smart conservative."

In just a week, Ryan had gone from being seen as the smart conservative whom Obama might take seriously to being seen as the symbol of how Democrats believe Republicans would dismantle the social safety net if the GOP took control of Congress.

But Ryan claims his cost shifting won't hurt seniors because free market competition will lower prices for everyone, actually reducing Medicare costs. In the free market private sector now, we're seeing 20 to 35 percent increases per family policy (based on my own premium increase). Throw in Ryan's meager taxpayer subsidies, and insurers should be doing quite well thank you.
Posted by John Peterson, Democurmudgeon at 2/06/2010 10:04:00 AM