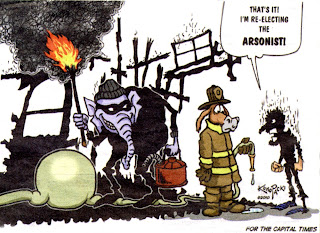 Despite having almost every economist unequivocally praise the Obama stimulus as successful, while keeping the country from slipping into another great depression, the media is determined to give equal time to the partisan GOP spin machines opinion that it has been a major boondoggle. It's as if the Republican attacks were based on economic fact. It's not:

NY Times: President Obama defended his year-old economic stimulus package, as Republicans … wage(d) a furious partisan battle over whether the bill was a monumental waste of taxpayer money or had rescued the economy from catastrophe.

The Republican approach centers on opinion, while reality centers on…

There is little dispute among economists that the measure has kept the jobless rate from being even higher than it is …the nonpartisan Congressional Budget Office recently calculated that the recovery package, formally called the American Recovery and Reinvestment Act, had saved or created between 900,000 and 2.3 million jobs. “The economy has shed some three million jobs over the past year, but it would have lost closer to five million without stimulus,” said Mark Zandi, “The economy is still struggling, but it would have been much worse without stimulus.”

And like Rachel Maddow has been pointing out for weeks, Republicans have been allowed to be flamboyant hypocrites by the news media:

Democrats sought to portray Republicans as hypocrites for voting against the bill and then rushing to claim their share of stimulus money for projects in their home districts, while Republicans painted the measure as a failure. The Democratic National Committee issued a video of its own, and the House speaker, Nancy Pelosi of California, said Republicans were “trying to have it both ways.” The left-leaning Center for American Progress, a close ally of the Obama administration, issued a list of lawmakers who voted against the recovery act “and then sought and/or took credit for its benefits” — a list that, the group said, included more than half of all Republicans in the House and nearly half in the Senate.

Heck, even the Wall Street Journal had to finally put together their own list of GOP hypocrites. But just as odd are the conservative criticisms that the Democrats haven't put out the blazing economic fire they created, fast enough:

Other leading Republicans … argued that Obama could hardly claim credit for improvements in the economy with three million jobs lost over the past year, unemployment at nearly 10 percent and a deficit at $1.6 trillion. \

But reality, especially in a red state like Mississippi, tells a whole different story:

A new approach that Mississippi and a growing number of states are taking to get people working again … Their salaries will initially be paid by the State of Mississippi, which is tapping into a relatively small pot of welfare money in last year’s stimulus package that can be used to subsidize jobs directly … some 21 states are already taking the direct approach, using a sliver of the $5 billion in welfare money in last year’s stimulus act that can be used to pay governments and private employers to hire people.

Florida recently announced that it would use up to $200 million to create thousands of jobs in the public and private sectors. Los Angeles County set itself a goal of
putting 10,000 people to work with its money. Tennessee's Perry County, paid for roughly 400 jobs, as varied as road workers and pie bakers, the unemployment rate dropped to 18 percent.

While Republicans claim the stimulus hasn't created any jobs…:

For now, stimulus money is paying the salary of Edgar Herring, a 49-year-old who lost his job of 18 years when a local lumber company shut down last fall, at his new job on the housekeeping staff at King’s Daughters Medical Center in Brookhaven.

It is also paying the salary of Roger Thomas, 36, who lost his job as a car salesman, at his new sales job with National Collection Systems, a locally owned waste management company in Jackson.

And it is paying Johnny B. McGowan, 59, Curtis R. Williams, 43, and John McCoy, 46, to install metal studs and Sheetrock in the old Standard Life building in downtown Jackson, an Art Deco tower being converted to apartments.

So what should you believe? The Republicans claims of stimulus failure or the documented proof presented by the CBO and state spending figures?
Posted by John Peterson, Democurmudgeon at 2/18/2010 10:25:00 AM