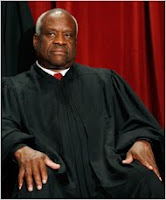 I'm still waiting for the Democrats and media pundits to include in their critiques of the Supreme Court decision to allow corporate money and personhood, the words "activist justices."
Republicans never miss a beat throwing out "liberal activist judge," even in the nominating process, without any proof at all. But politicians and media talking heads have disassociated activism from the conservative philosophy. Which brings me to conservative activist Justice Thomas. Read how Thomas shows contempt for a free press, as though it were not a part of the constitution, equating it to a completely seperate entity known as a corporation. There is a difference. NY Times:

At law school in Florida, Justice Clarence Thomas vigorously defended the Supreme Court’s recent campaign finance decision. “I found it fascinating that the people who were editorializing against it were The New York Times Company and The Washington Post Company,” Justice Thomas said. “These are corporations.” The law struck down in Citizens United contained an exemption for news reports, commentaries and editorials.

But this troubled, emotionally insecure, and out to prove he made it on his own activist justice isn't concerned about the constitution, but instead, took aim at a flawed law he was finally able avenge.

He added that the history of Congressional regulation of corporate involvement in politics had a dark side, pointing to the Tillman Act, which banned corporate contributions to federal candidates in 1907. “Tillman was from South Carolina, and as I hear the story he was concerned that the corporations, Republican corporations, were favorable toward blacks and he felt that there was a need to regulate them.” It is thus a mistake, the justice said, to applaud the regulation of corporate speech as “some sort of beatific action.”

Thomas of course glosses over the overriding issue that despite an individuals right to speak, even in a group, that doesn't suddenly mean the group has the same rights as an individual. A simple yet baffling concept for the worst supreme court justice on the bench right now.
According to Thomas, one bad intention, a racial one, is enough to negate the sound reasoning behind keeping unlimited amounts of corporate money out of elections and the idea that corporations aren't people. Convoluted and hyper-conservative in his reasoning…

Thomas' partisan conservative philosophy shines through with this characteristically authoritarian view of his powerful position on the Supreme Court bench.

Questioning the Supreme Court and other government branches needs to stay within the range of fair criticism or "run the risk in our society of undermining institutions that we need to preserve our liberties," Justice Clarence Thomas said. Thomas (said) that some comments he hears about the court "border on being irresponsible."

The question of ideology is answer definitively here with Clarence Thomas, who on one hand advocates a strict reading, a constructionist theory of the constitution, while excepting the premise of looking at things differently. The typical conservative contradiction.

"The idea of assigning ulterior motives to opinions that people don't agree with, rather than saying simply that the court doesn't agree with my argument. There are different approaches, because we start with different assumptions. Or we look at things differently," he said.

Is it any wonder even Pres. Obama considered Thomas the worst justice, up until Alito mouthed "not true" that is.
Posted by John Peterson, Democurmudgeon at 2/04/2010 10:34:00 AM