Liberals are Smarter than Conservatives. Religious Right Wingers are by Nature, Paranoid. 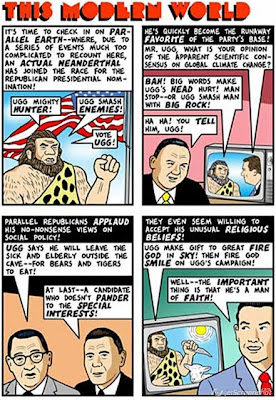 I've been saying this for awhile, but my conservative friend only laughs at the suggestion. Well, now I have scientific proof.

CNN-Political, religious and sexual behaviors may be reflections of intelligence, a new study finds. Evolutionary psychologist and libertarian Satoshi Kanazawa, at the London School of Economics and Political Science correlated data from a large national U.S. sample and found that, on average, people who identified as liberal and atheist had higher IQs. The findings will be published in the March 2010 issue of Social Psychology Quarterly.

The IQ differences, while statistically significant … should not be used to stereotype or make assumptions about people, experts say.

Given that human ancestors had a keen interest in the survival of their offspring and nearest kin, the conservative approach fits with the evolutionary picture more than liberalism, Kanazawa said. "It's unnatural for humans to be concerned about total strangers." he said.

None of this means that the human species is evolving toward a future where these traits are the default, Kanazawa said. "More intelligent people don't have more children, so moving away from the trajectory is not going to happen," he said.
Posted by John Peterson, Democurmudgeon at 2/27/2010 05:13:00 PM