Even Paul Ryan Lies...all the time. 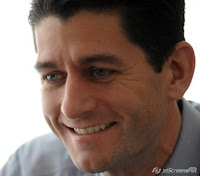 I am not obsessed with Rep. Paul Ryan. I'm really more amazed at the adoring respect given his draconian ideas simply because he has the courage expose them to the light of day. He has a plan, no doubt about it, but a bad one the forces Americans to ration their own life saving health care. To Ryan, it's heroic to see a father turn down treatment that might save his life so he won't leave his family broke and his children out on the street.
Said Ryan: "Rationing happens today! The question is who will do it? The government? Or you, your doctor and your family?"
That's self rationing. That's Paul Ryan's plan.

Rep. Paul Ryan (R-Janesville): “Like the deeply flawed House and Senate bills, the president’s overhaul violates the very goals he laid out: It raises hundreds of billions of dollars in new taxes, drives health care costs up, not down, and forces millions of Americans to lose the coverage they now enjoy. We can fix what’s broken in health care without breaking what’s working, without trillions of dollars in new spending, taxes and debt and without the government taking it over.”

Let's start with Ryan's first point: "Raises hundreds of billions of dollars in new taxes…" Many Republicans have taken pledges never to raise taxes, no matter what. If you're running a business, or a government, that's a bad policy. Pay go, remember? This is not a tax on lower and middle class Americans, but a tax on the top 1 percent. On average about 16 percent of the really wealthy's income is taxed, while you and me pay around 30 to 40 percent. No, really.

"Drives health care costs up, not down…" Wrong, the CBO contradicts Ryan here by saying the Democratic plan saves over $120 billion the first ten years, and over a trillion dollars the next ten years. By the way, this is the same CBO Ryan's been talking up as the final word on his plan, a plan the CBO says with caveats, saves federal dollars but not consumer dollars.
We'll just get stuck with the bill as individuals, alone, living in terror of our own ill health.
Posted by John Peterson, Democurmudgeon at 2/23/2010 11:12:00 PM