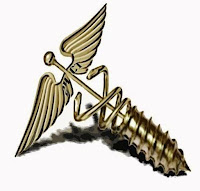 For a long time I thought I was crazy thinking health care costs had to be a drag on American businesses. I guess I wasn't as crazy loco as I thought:

The Star Tribune: For about 180 employers polled in a survey commissioned by HealthPartners, health care costs for employees emerged as the most-common obstacle to business expansion, more than the economy itself, access to funding or flaccid consumer demand.

Twenty-one percent of employers cited affordable health care as an obstacle to expansion, with government regulations next (12 percent), followed the by economy (11 percent). Global competition trailed at 5 percent.

Andrea Walsh, chief marketing officer at HealthPartners, the third-biggest health insurer in Minnesota said, "Almost two-thirds of companies said health costs jumped 10 percent or more in the past two years, with a quarter reporting costs surging by more than 20 percent."

Separately, the government said this week that health care consumed a record 17.3 percent of all spending in the U.S. economy last year -- roughly $2.5 trillion.

Republicans never talk about the dwindling take home pay of the American worker:

Employers, about 60 percent are increasing employees' share of costs through higher premiums, co-pays or deductibles. Some employers seemed to realize they've already shifted costs to the point where employees are avoiding the doctor. Thirty-two percent of employers said they were interested in reducing financial barriers for workers who need care.

Employers realize they "simply can't keep moving the dollars around," Walsh said. Some companies -- faced with a choice of jobs or health benefits -- simply choose jobs.

Where's the national press on this story? Kind of flies in the face of the Republican Party's whiny rhetoric, doesn't it.
Posted by John Peterson, Democurmudgeon at 2/08/2010 12:38:00 PM