For the Unemployed and the Uninsured, Tough Love from Republican Sen. Jim Bunning 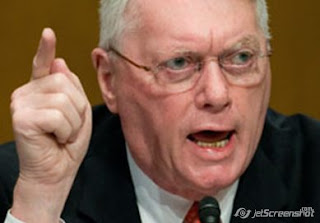 Hey Americans, Republican Sen. Jim Bunning is making a point during this Great Recession. As reported in the Washington Post: “I’m trying to make a point to the people of the United States.” And to get your attention, he's going to block the following soon to expire safety nets from a demoralized American public:

BLOCK the extension of unemployment pay,

BLOCK extending federal subsidies to help pay health premiums for people who have lost health insurance along with their jobs,

Hey unemployed, get the message from Republican Sen. Jim Bunning yet?
Posted by John Peterson, Democurmudgeon at 2/26/2010 12:23:00 PM