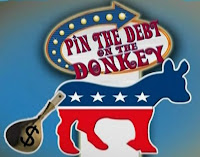 The stimulus facts, or don't believe a word of this liberal CBO malarkey

If you were to hear Rep. Paul Ryan talk about his draconian dissembling of Social Security and Medicare, the CBO's conclusion that federal spending will go down as a result of his plans, you'd think God gave his stamp of approval. But if the CBO supports anything Democratic, it's either wrong or wishful thinking on the CBO's part.

So having set it up this way, here's the good news, from the conservative Washington Times:

CBO sees big job boost from stimulus act … added at least 1 million new jobs and possibly as many as 2.1 million jobs in the final three months of last year, and lowered the unemployment rate by at least a half a percentage point, according to a new analysis from Congress's official scorekeeper. "The policies that were enacted in the stimulus bill are increasing GDP and employment relative to what they otherwise would be," said Douglas Elmendorf, director of the nonpartisan Congressional Budget Office.

Now the bad news from our happy Republican friends:

But Republicans said the stimulus, which now totals $862 billion in new spending programs and tax cuts, has been good for government but not for creating private-sector jobs. "If you're a government worker or belong to a teachers union, the stimulus has worked," said Rep. Kevin Brady, Texas Republican.

Republicans hate the idea government workers weren't fired, which would have downsized big government, leaving families across America without away to pay their bills, buy food, be good consumers or make their next mortgage payment. Public employees spend lots of money in their communities. But splitting hairs is the kind of doom and gloom stuff you get from the party of no, and a reason why public opinion on the economy is in the tank. Say it enough, people will start believing it there's no recovery. But…

Stimulus contractors say they've created about 600,000 jobs directly from the spending, but the CBO uses economic modeling to reach its conclusions. That accounts for the wide range of potential job creation. The CBO also said U.S. gross domestic product in the final quarter of 2009 was 1.5 percent to 3.5 percent higher than would have been the case without stimulus spending.

These facts should not get in the way of pure ideology though. What is really important is winning the next election.
Posted by John Peterson, Democurmudgeon at 2/23/2010 11:18:00 PM