No Sex Ed better than No Abstinence only 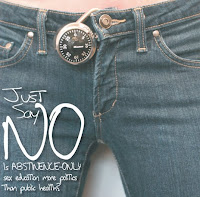 Abstinence only sex ed is on its way out in Wisconsin, but not without the threat of entire school districts dropping the course completely in protest. At least that's what the crazy, lunatic right wing groups are promising, without a shred of evidence to point too. The Wisconsin State Journal:

Opponents of a controversial sex ed bill (teaching students about sexually transmitted diseases and methods of safe sex, including contraception) passed by Wisconsin legislators last week, warn that if Gov. Jim Doyle signs the bill into law as he has promised, some local school districts will stage a revolt against the measure by ignoring it or dropping their human growth and development curriculum entirely.

“Did the state in its zeal to impose its own way even think about the consequences? Because a lot of districts are just going to just walk,” predicts Matt Sande, director of legislation at Pro-Life Wisconsin.

Yeah right. Like that would actually happen anytime soon, when...

...Julaine Appling, president of Wisconsin Family Action, says “They have taken options away from local school districts. Now the choice is something Madison says is best or to have no human growth and development classes at all, which, quite honestly, is the better choice.”

Neither Appling nor Sande, in fact, knew of any school districts that have already decided to drop their sex education curriculum.

..“The thing that concerns me the most about the bill is that it pushes aside local community input,” says Senator Luther Olsen, R-Ripon. You guys in Madison don’t need to tell us what to do.”

That's funny, for years local communities input has been set aside already, because:

Under current law districts can choose to provide only instruction focusing on abstinence or chastity.

Did Sen. Olsen really think he could get away with his pointed, freedom loving lie? If that wasn't outrageous enough, try on a little bigotry.

Critics also pan language in the measure that states programs must use “instructional methods and materials that do not promote bias against pupils of any race, gender, sexual orientation, or ethnic or cultural background or against sexually active pupils or pupils with disabilities.” “What that means is you can’t tell them what’s right or wrong, you just have to be a purveyor of facts,” Olsen says.

What? Republicans have been saying for years that teaching "right and wrong" should be left up to PARENTS, and not some liberal union teacher. They've been whining about liberal indoctrination for years. What they didn't say was conservative indoctrination gets a pass.
But one of the best comments comes from vocal opponent Sen. Glenn Grothman, R-West Bend, when it came to:

..."the bill’s requirement that there be no “bias” based on a student’s sexual orientation, a protection he attempted to remove from the bill with an amendment that failed to get enough votes to pass.

Grothman explains that he believes the topic should not be discussed at all in schools. “Would you want your daughter’s teacher in 7th grade talking with her about homosexuality?” he asks. “They should be talking about Algebra.”