Republicans were FOR Mandated Health Care Coverage Once Upon a Time (before Obama)!

They were for mandated insurance coverage, before they were against it...

Rachel Maddow again couldn't make it any clearer; Republicans are hypocrites of the first order, and shouldn't be allowed to get away with it. In the "black video box" below, click start to see how out in the open Sen. Chuck Grassley and others are about their double standard. Rachel and the Washington Post's Ezra Klein won't let them get away with it. So why isn't the rest of the press corps doing this kind of reporting?

Have you also noticed that when these guys get caught having it both ways, they are quick to admit that retroactively, they were wrong in the past. "We now thinks it was wrong back then..." is pathetic and insulting. Sen. Lamar Alexander's comment is one of the most memorable ones to date, and an instant classic:

"Our country's to big, to complicated, to decentralized for Washington." 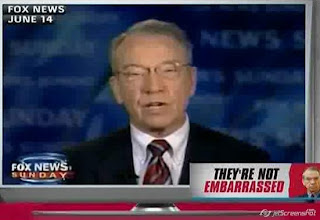