Governor Candidate Scott Walker Promises to Wipe Out Unemployment in Wisconsin During Great Recession, But Will Democrats Let Him? 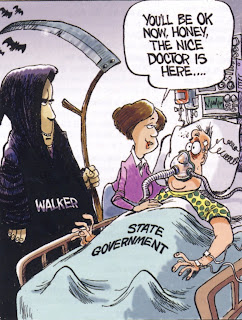 The would be emperor already lost his clothes, with the following wild off the cuff claim:

That means Walker would be slashing the unemployment rate to a fraction of a percent, a "laughable" prospect, according to liberal group One Wisconsin Now. "Instead of coming up with a detailed economic recovery plan, Walker simply pulled a number out of a hat. His choice of a number reveals how little he knows about the Wisconsin economy," said Scot Ross, the group's executive director.

Walker's primary opponent, former U.S. Rep. Mark Neumann … quoted statistics that suggest Milwaukee has one of the nation's worst records of retaining jobs. "If Scott Walker had a plan to bring jobs to Wisconsin he should have implemented it in Milwaukee sometime during the last eight years," Neumann said.