Will Republicans Denounce Insurance Premium Hikes During a Recession? Heck, while everyone else is tightening their belts, insurers are…. 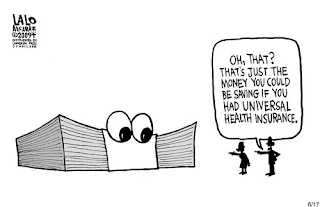 Huh oh, health care reform opponents have a problem. The insurance industry isn't laying as low as they probably should, especially now while reform is being debated, and it's making their defenders look really bad… and wrong.

Mistake one: What possessed them to hike premiums through the roof now?

AP-Health insurer WellPoint blames the Great Recession and rising medical costs for its planned 39 percent rate increase for some California customers. To President Barack Obama, however, it's Exhibit A in his campaign to revive the health care overhaul … it remains difficult to understand how premium increases of that size by can be justified when WellPoint Inc. reported a $2.7 billion profit in the last quarter of 2009.

Mistake two: While reform opponents have blasted mandated coverage for healthy people who don't want to be forced to buy insurance, WellPoint blows a hole through that argument by claiming healthy freeloaders would dramatically increase costs.

Brian Sassi, the head of WellPoint's consumer business unit, said that the weak economy is leading individual insurance buyers who don't have access to group plans to drop coverage or buy cheaper plans. "When the healthy leave and the sick stay, that is going to dramatically drive up costs."

Health care freeloaders, tea party protesters and Republican politicians seeking (Obama's) Waterloo, may have played this waiting game just a little to long. The desire for profits waits for no one.

But don't be to disheartened, WellPoint has a solution you'll just love.