Did you Know Abortion Providers Were Racists? The Right Wings "I know you are but what am I" Law, is Race Baiting on Steroids 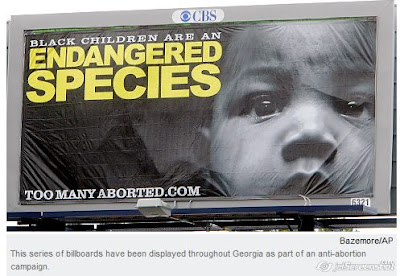 Did you know abortion providers were racists and targeting black communities to control their populations? I didn't either, until I heard about the billboards in Georgia supporting legislation to make it a crime to solicit abortion based on the race or sex of an unborn child. Wow!

"I think [the billboard campaign] is necessary," said Cheryl Sullenger, senior policy adviser for Operation Rescue. "Abortion in the black community is at epidemic proportions. They're not really aware of what's actually going on. If it shocks people ... it should be shocking."

The billboards, sponsored by Georgia Right to Life, are part of a push to have
legislation established in Georgia that would make it a crime to "solicit a woman to have an abortion based on the race or sex of the unborn child."

Just as transparent as Republicans trying to save black children from our failing public schools with vouchers, it was only logical to bring the next Republican wedge issue into the race baiting fold.

"To use racist arguments to try to bait black people to get them to be anti-abortion is just disgusting," said Professor Beverly Guy-Sheftall, who teaches women's history and feminist thought at Spelman College.