So how has Scott Walker moved Wisconsin forward?

For “stand with Walker” drones, it’s not what he’s accomplished, it’s how he’s successfully attacked Democrats and punished them.

You’ll notice from the tweets here, echoed by my conservative friend in Milwaukee, that the right wing base doesn't care about the deficit producing bad budgets and unemployment rates that don’t include low participation rates for job seekers.

Walker's "superb record in office" is based on making "unions cry," and pushing back against the "vicious opposition" exercising their 1st Amendment right to redress their government. Walker put in place regulations and fines for protesters, deemed later to be unconstitutional in a court of law for gods sake. Even worse, Walker wrote a book about how he thought protesters were trying to intimidate him: 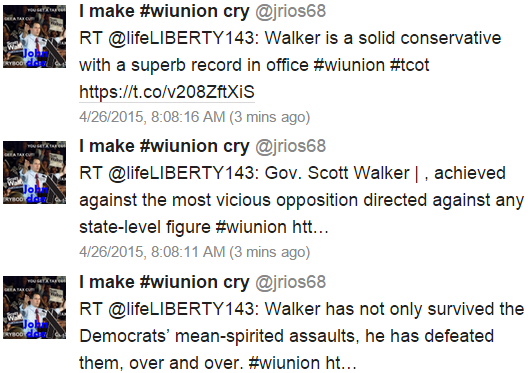 But Walker's "accomplishments" have little to do with moving us forward or solving problems relating to wage growth, health care certainty, and actual job creation (not corporate welfare). Cap Times:

Walker even took credit for an already healthy state pension system. I guess we should give him Brownie points for not screwing that up...yet.


Touting his record in Wisconsin, Walker boasted of the state's pension system, its 4.6 percent unemployment rate.

Absent were any mentions of Wisconsin's job growth, which earned him criticism from his detractors during a recent trip to Minnesota. The state ranks at 40th in the nation for job growth and 42nd for wage growth, according to the federal Bureau of Labor Statistics. And the state's job growth has lagged the national average since six months into Walker's first term.

But he sure showed those union loving liberal Democrats.
Posted by John Peterson, Democurmudgeon at 4/26/2015 01:19:00 PM