Scott Walker again sees Protests against "Religious Freedom" law, this time in Indiana and Arkansas, as phony outrage and intimidation.

Scott Walker is signalling to conservative voters that any opposition to the Republican agenda will not be tolerated and will not be taken seriously. And they love it.

We saw this same attitude in Wisconsin, after hundreds of thousands of protesters hit the streets statewide. Walker said people were just trying to intimidate him into reconsidering his support for Act 10 (a direct attack on workers and collective bargaining). He even wrote a book bragging about his distaste for democratic dissent, titled "Unintimidated."

Seriously, who opposes public dissent, a principle that turned a colony into a sovereign nation. He's now bashing the massive protests in Indiana and Arkansas against the discriminatory "freedom of religion" law.  Walker thinks the opposition coming from big business and gay rights supporters is nothing more than critics "looking for ways to be upset." It's an authoritarian attitude that borders on frightening.

The images here tell the story: Belying Walker's position are those who are already trying to exploit and discriminate against gay individuals. And this is just a few days after the laws passage. Imagine what this will be like a year from now: 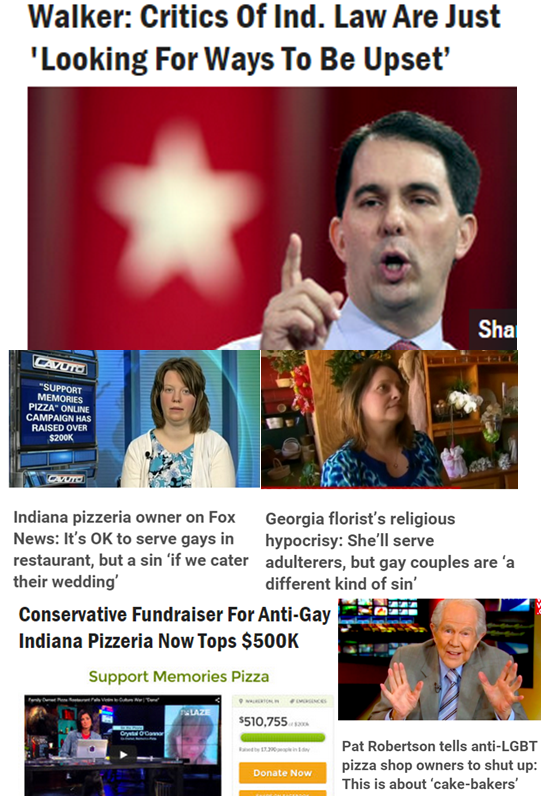 Gov. Scott Walker (R) characterized critics of Indiana's religious liberty law as chronic malcontents stirred up by "hype and hysteria" in the media, according to audio surfaced - Buzzfeed.

“I just think this is people who are chronically looking for ways to be upset about things instead of really looking at what it is," Walker said (to) radio host Charlie Sykes on Wednesday.

Walker made the remarks when asked whether he would have approved a religious-freedom bill like the one Indiana Gov. Mike Pence (R) recently signed into law. "It’s even more entrenched than anything that can be in the state statues, and we don’t have the kind of hype and hysteria that the national media is creating on this."