DNR hopes to kill scientific research that is "not being well aligned with program needs." "Policy would drive science instead of the other way around."

I didn't think it was possible to go beyond Scott Walker’s proposal to eliminate 18 scientists at the DNR;

We saw it in the way the deer herds are now being managed; by hearsay and the desires of special interests groups, not research and science.

Critics, both inside and outside the agency, say such a reorganization would rob the state of impartial science that should guide critical natural resource management decisions … management would more likely be driven by policy decisions and politics.

This is all politics and an outright taking of our government, driven by colluding lawmakers and businesses that have their own plans for Wisconsin’s great outdoors. Since no one believes anything the Democrats say (unless it’s backed up by at least one agreeing Republican), let’s go back to President Theodore Roosevelt, who’s on the mark warning about what is happening right now should be enough: 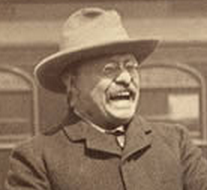 "It is also vandalism wantonly to destroy or to permit the destruction of what is beautiful in nature, whether it be a cliff, a forest, or a species of mammal or bird. Here in the United States we turn our rivers and streams into sewers and dumping-grounds, we pollute the air, we destroy forests, and exterminate fishes, birds and mammals -- not to speak of vulgarizing charming landscapes with hideous advertisements. But at last it looks as if our people were awakening. We have become great because of the lavish use of our resources. But the time has come to inquire seriously what will happen when our forests are gone, when the coal, the iron, the oil, and the gas are exhausted, when the soils have still further impoverished and washed into the streams, polluting the rivers, denuding the fields and obstructing navigation."

Cathy Stepp’s DNR has outright admitted that the latest is “an effort to address the legislative perception of research not being well aligned with program needs.” Not clear enough yet? What happens when science says something is a bad idea, like iron mining? It’s called “biased:”

State Sen. Tom Tiffany, R-Hazelhurst criticized a bureau report on environmental concerns surrounding the now-defunct plan from Gogebic Taconite to build an open-pit iron mine in northwestern Wisconsin. He said the report was biased against the mine. Tiffany also told the Milwaukee Journal Sentinel that he was not supportive of the bureau doing research related to climate change because the science behind global warming is still “theoretical.”

Side-note: Isn't it bizarre how Republicans say climate change is theoretical, but then stop all the research that could turn that theory into fact?

So who needs the…

...hundreds of papers that, among many other things, evaluate the removal of phosphorus from Wisconsin lakes, the impact of lakeshore development, how timber cutting might affect breeding birds, fish surveys in the spring to help determine the health of the state’s fisheries … monitor air pollution levels and study the potential impact of practices such as frac sand and iron mining.

There is only bright spot: environmentalists could be big winners in court:

Dave Clausen, former chairman and member of the state NRB, which sets policy for the agency, said moving researchers out of an independent bureau and into other divisions will destroy objective science in the agency. He said researchers … would more likely be told to do research that only supports the division’s goals, even though those goals may be driven by a political agenda. In other words, he added, policy would drive science instead of the other way around.

Clausen added that the lack of independent science could come back to haunt the agency if its management decisions are challenged in court. “When you start making decisions on hunter or user whimsy, you lose your ability to defend yourself,” Clausen said.

What makes the cuts to the DNR so surprising:

The DNR, for example, by its own admission, is more than 20 years behind on a state wetlands inventory.

They've only been able to inspect 20% of the sand mines due to staff shortages. Republicans are bad managers and bad at budgeting, since they cut the taxes that would have paid for some of this.