During a call I had with my conservative friend in Milwaukee about Indiana's religious freedom law, he did what most Republicans do so often: He made his case in support of the law by bringing in a bunch of completely unrelated topics, which then veered off into going to war with Israel's enemy, Iran.

He then made this comment, and I'm paraphrasing: "Democrats started WW1."

But then I saw this at Raw Story, and I had to chuckle:


Beck: “When we entered the Progressive Era, we caused World War II." 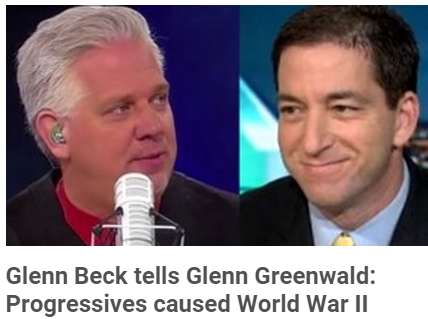 It's funny seeing these two together...even agreeing on something. I'm sure my conservative friend would disagree with Beck's conclusion below though. War to him and Scott Walker...preemptive war especially, is always the better answer, because you never know what they're hiding:


Greenwald: “But I think that region, like most regions, is filled with extremists. In Iraq and Syria, we’re fighting with Iran against ISIS. Because they fear Sunni extremism. Yes, there’s lots of disturbing rhetoric that comes from Iranian mullahs, [but] there’s a basis of rationality that allows us to sit down. We can’t afford a war with a country three times the size of Iraq. Part of the problem is that [we have embraced] this theory of endless war.”

Greenwald agreed: “Endless war, has brought down every empire in history, and before it does that, it degrades the population. If you constantly find new people to kill and torture and invade and bomb, it starts to seep into your domestic life.”