Justice Abrahamson's Lawsuit brings much needed focus on GOP scheme to "Get Shirley!!!"

The Republican idea of calming the states highest court, by replacing the supposed divisive more liberal leaning Justice Shirley Abrahamson, is a fiction mentioned at Dominique Paul Noth great blog site that critiques the new constitutional amendment. Here are a few blunt but true little known facts you won't get in the newspapers about our justices:


Rotating the fate of justice among conservatives assumes their politics make them collegial and it sure hasn't.  Law clerks current and former have stories to tell. The WMC’s chosen heir as chief justice, Patricia Roggensack, “can be a more difficult piece of work than Shirley ever was,” one told me.  Michael Gableman is openly scoffed at by his colleagues as a lesser intellectual who needs “simple things explained to him at length.”  David Prosser is seen as an unpredictable gadfly “bouncing off the walls of procedure.” And so forth.

Abrahamson's lawsuit was quite detailed too, a fact not mentioned or analyzed by reporters. PolitiFact rated "Mostly False" the idea voters reelected her as chief justice because "the term “chief justice” in never on the ballot." That may be true, but her campaign certainly did without question:


And her ability to seize on legal holes in regulations ... Such as the continuing argument that Wisconsin voters didn't know what they were voting for back in April 2009. As the lawsuit details with evidence, “Wisconsin’s Chief” was a central statement in every piece of campaign literature and even in ads run on conservative talk radio. “Fair. Independent. Wisconsin’s Chief” was the slogan and voters would have to be living in a cave to not know they were choosing the chief justice for the next 10 years. Her campaign committee was called the “Chief Justice Shirley Abrahamson Re-election Committee,” and the tagline “Wisconsin’s Chief” was everywhere.

“It was clear that a vote for her was a vote to continue her in the office of chief justice,” the lawsuit details. “...that theme of continuity in the chief justice position and would not have sought re-election if there was a question she would not continue in that role.”

Aside from the Republican attempts to declare her too old by capping a justices age on the court, a bill still on the sidelines, the GOP authority has abandoned any subtleties in their push to remove her:


Several legislators cited state Sen. Tom Tiffany as one example of a politician assuring the press and centrist lobbying groups it was not about Shirley while assuring WMC supporters it definitely was.

Even their own right-wing commentators took their leaders to task for not admitting this was the “Get Shirley” amendment. 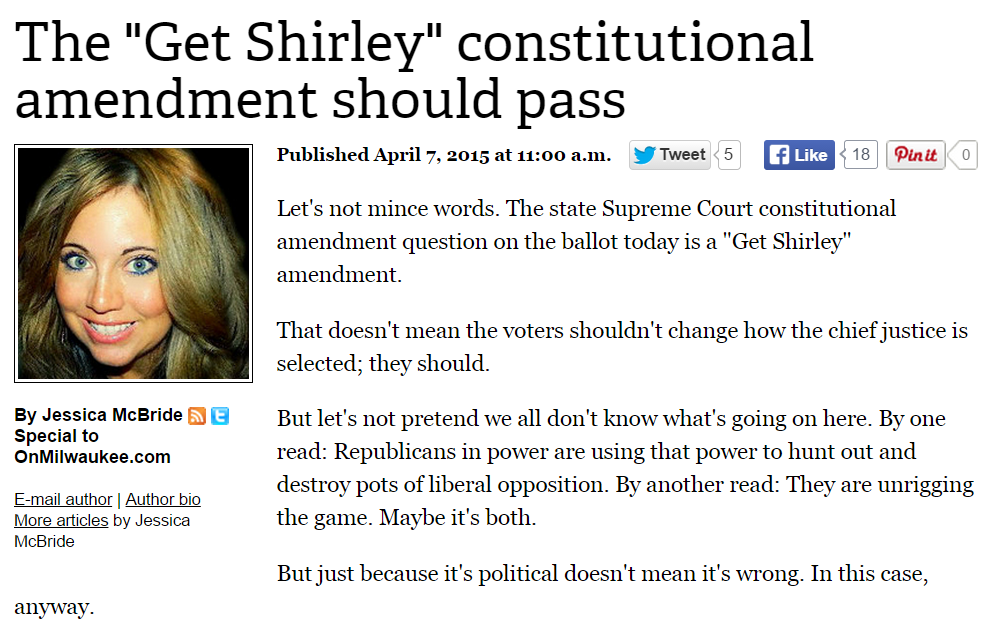 But let's not pretend we all don't know what's going on here. By one read: Republicans in power are using that power to hunt out and destroy pots of liberal opposition. By another read: They are unrigging the game. Maybe it's both. But just because it's political doesn't mean it's wrong. In this case, anyway.

Specifically, voters will be asked today whether they want to change how the chief justice is appointed. They should make that change.

Why conservative voters didn't think it was also odd to see big money spent on this change is anybodies guess, but the silly idea the change would bring "democracy" to the court is just plain comical, and effective:

Supporters of the change — including Wisconsin Manufacturers & Commerce’s group Vote Yes for Democracy, which spent at least $600,000 to get it adopted — argued it’s undemocratic to have the position go automatically to the justice with the most experience.

And yet nationally, people were shaking their heads in amazement:

Justice at Stake, a national judicial watchdog group based in Washington, issued a statement following adoption of the amendment saying a “siege of special interest money” and “big money hardball politics” led to its adoption.

While 22 other states use some sort of similar selection process, changing from one system to another and replacing the current chief justice is unprecedented, said Bill Raftery, an analyst with National Center for State Courts based in Williamsburg, Virginia. “There’s nothing comparable,” he said. “This has just not happened before. ... It’s exceptional and unique.”