It's all becoming so much clearer now, after I stumble on a curious Scott Walker reference and link in a recent Huffington Post story.

But that story has a history, like this one from the Cap Times' Steven Elbow back in July of 2013:

Scott Walker among signers of Koch-backed 'No Climate Tax Pledge:' You’ve no doubt heard about Grover Norquist’s “Taxpayer Protection Pledge.” Well, there’s a new pledge in town … This pledge is called the “No Climate Tax Pledge,” but it might as well be called the “Koch Brothers Protection Pledge,” since it was devised by a group co-founded and backed by the billionaire brothers.

While Walker didn't openly suggest banning all references to climate change, he's made it clear the idea itself has no place in his government. These losers are okay with not playing it safe, you know, just for the heck of it. If they're wrong, they will be taking us down with them.

Here's Chris Hayes with the only person on a panel of 3, not to vote for the climate change ban, Secretary of State Doug La Follette:

Attorney General Brad Schimel wasted no time blowing any credibility he might have had left after his fumbling bumbling campaign for the top cop spot. Is he not a real life Homer Simpson? 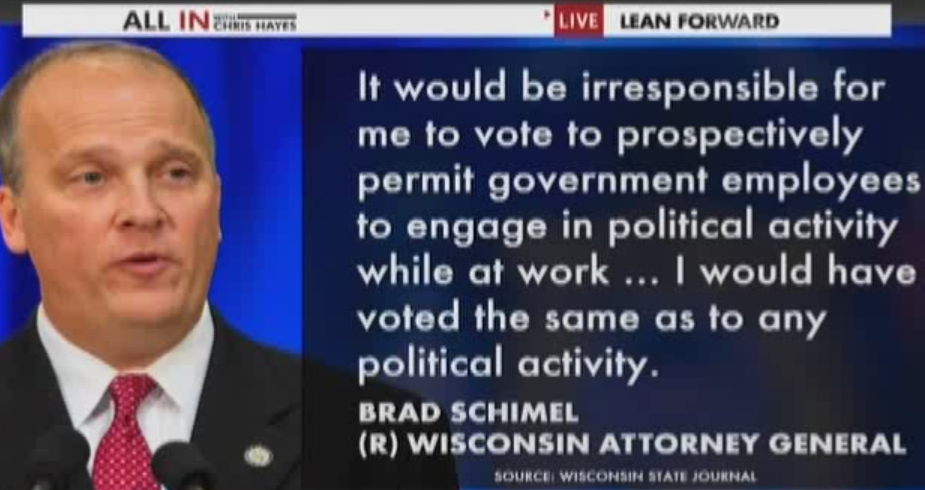