I know this has been said many times before, but really, if the following happened under a Democratic administration, they would be tared and feathered for life and we'd never hear the end of it.

But this is all about Scott Walker, and it never matters one bit if Walker, the chairman of the Wisconsin Economic Development Corporation (WEDC), allows jobs here to move to Mexico.

Hand it to WKOW's Greg Neumann for sticking with this story for so long. We're now seeing how important it was to pass right-to-work:


A global power systems management corporation that has received nearly $370,000 in tax incentives from the Wisconsin Economic Development Corporation (WEDC) since 2012 is shipping jobs from Wisconsin to Mexico for the second time in three years ... the elimination of 93 employees there ... laying off 163 employees at its Cooper Power Systems plant in Pewaukee in April 2013.  The company moved those jobs to Mexico as well. Eaton Corp. had $22.6 billion in sales in 2014.

So it's not like they couldn't afford to keep the jobs in Wisconsin out of the goodness of their heart (supply side reasoning):

Today, this depressing job loss outlook finally got some press:

Wisconsin employers have already notified the Department of Workforce Development (DWD) of 3,543 layoffs that will happen in 2015, putting the state on pace to eclipse 10,000 for the year.

Surprisingly, the Walker administration doesn't seem too concerned. The only number Walker can't stop talking about is the 4.6% unemployment stat. Why republicans don't want to count those not participating in the search for jobs is anybodies guess, since it's always an issue when Obama's numbers are released. 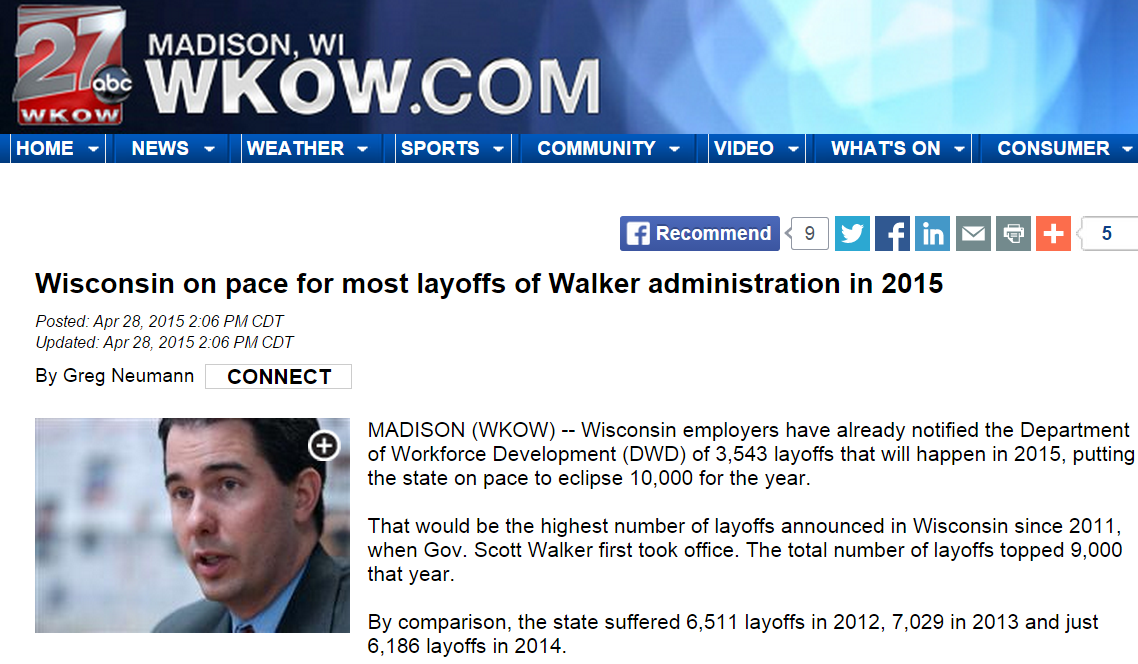