Walker runs from anti-war and pro-gay marriage church, uses kids as an excuse.

If Scott Walker had his way, he’d have you believe his support for the preemptive war in Iraq and gay marriage ban had nothing to do with changing churches. He said it was really about getting his right wing sons a few playmates in spirit and thought, you know, where parents are more receptive to preemptive wars and hating gays.

Hey, is this guy transparent or what? 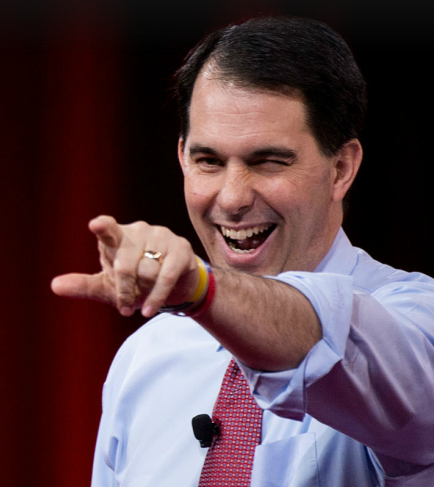 Walker affirmed that he changed churches about a decade ago so his school-age sons could participate in activities with children their age. He said it was not because his previous church was more welcoming to gays and lesbians. Walker transferred his membership from Underwood Memorial Baptist Church to Meadowbrook Church about 10 years ago, soon after Underwood took a turn to the left with the arrival of the Rev. Jamie Washam, who spoke out against the war in Iraq and Wisconsin's gay marriage ban. Both churches are in Walker's hometown of Wauwatosa.

Instead of taking a stand on these issues, Walker creatively blamed the church and used his kids as an excuse. Yeah, right, has not having enough kids at a church been a real problem. Ridiculous.

"It was really about the kids. For us, ultimately, we wanted to go to a place where our kids had the ability to interact with other kids." Walker said his sons, Matt and Alex, were about 10 and 9 at the time, and few other children that age attended Underwood. The family tried out Meadowbrook after an associate pastor's wife suggested it to Walker's wife, Tonette. Moving to Meadowbrook allowed one of his sons to later go on a mission trip to Belize, a chance he never would have had at Underwood, Walker said.


Meadowbrook's services, like the church leaders, are casual and upbeat; sermons are infused with a conservative theology focused on making the Bible relevant today.

So Walker wants us to believe he knew Underwood was a sure ticket out of the country to Belize for his kid?
Posted by John Peterson, Democurmudgeon at 4/26/2015 10:59:00 PM