Wisconsin Watchdog, once known as Wisconsin Reporter (only minus the reporting), is playing up to the ignorance of it intended readers, with the piece I screen captured below. This online rag is implying the Milwaukee DA is telling Scott Walker to keep his mouth shut about the John Doe investigation. In reality, DA John Chisholm warned Walker that  making defamatory false statements is a chargeable offense.

Keep in mind, a John Doe judge ordered secrecy for all the parties involved. Even Walker made that clear hundreds of times. Of course republican special interests defied the order...so much for the rule of law.


Walker gave this response to WISN’s Mike Gousha: "As you know, as I've pointed out many times in the past when we've talked about this, the law's pretty clear in this state," Walker said. "Anyone who knows anything about a John Doe can't talk about it. Anyone who doesn't know anything about it shouldn't talk about it. So, I've not commented on the Doe itself because I've abided by the law."

Mr. Unintimidated was told to shut up? But conservative activist Eric O'Keefe and the Wisconsin Club for Growth played the victim, and opened their trap.


A director of the Wisconsin Club for Growth told Fox News he was defying a secrecy order in a probe of his group and the campaign of Gov. Scott Walker. O’Keefe said: “Yes. An unconstitutional secrecy order. And I'm defying the secrecy order.”


Of course he knows it's unconstitutional, who needs the courts. Ironically, some of their secret emails were released exposing their nefarious plans.

The article makes the case that Walker can lie if he wants about the DA, even defame his character; it's "political" free speech, a 1st Amendment right. Walker also claimed a raid to collect evidence was pure intimidation: 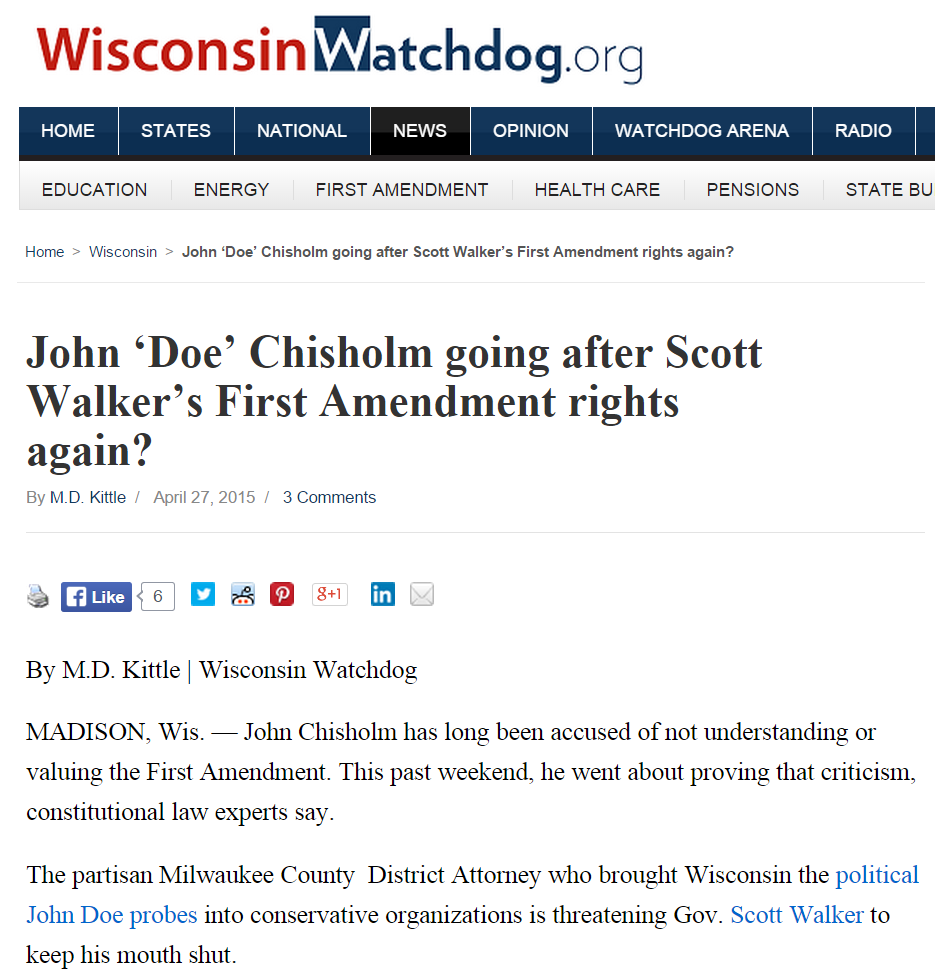 ...criticism that they had ordered aggressive raids on the homes of targets...

But it wasn't that at all:


Chisholm: "Look at the use of the word ‘raid’ for example. Sounds scintillating. But lawfully executed, judicially approved search warrants are not ‘raids.’ I have not trained for or participated in a ‘raid’ since leaving the Army, where it has a very real technical definition.”

Walker could also prove his allegation by releasing some of the secret information, but...

Watchdog's one-sided story skipped the DA's response completely, which would have changed the story and cleared them:

Milwaukee County District Attorney John Chisholm suggesting Walker could be criminally charged for lying, “As to defamatory remarks, I strongly suspect the Iowa criminal code, like Wisconsin’s, has provisions for intentionally making false statements intended to harm the reputation of others.”

Special prosecutor Francis Schmitz, a self-described Republican, said “I invite the governor to join me in seeking judicial approval to lawfully release information now under seal … Such information will show that these recent allegations are patently false." Chisholm said he agreed … "Stripped of niceties, Mr. Schmitz is saying the governor is deliberately not telling the truth."