Media okay with Republican schemes to play off middle-class fears and insecurity, yet blame Democrats for not being real.

The media continues to hold each party to completely different standards, giving the edge and advantage to Republicans who can just make things up on the fly.

While Democrats are expected to explain their positions and act like normal Americans, republicans are allowed to be the schemers, hoping to fear monger the public into submission.

These two headlines tell the story. I'm not making it up. I see this all the time: 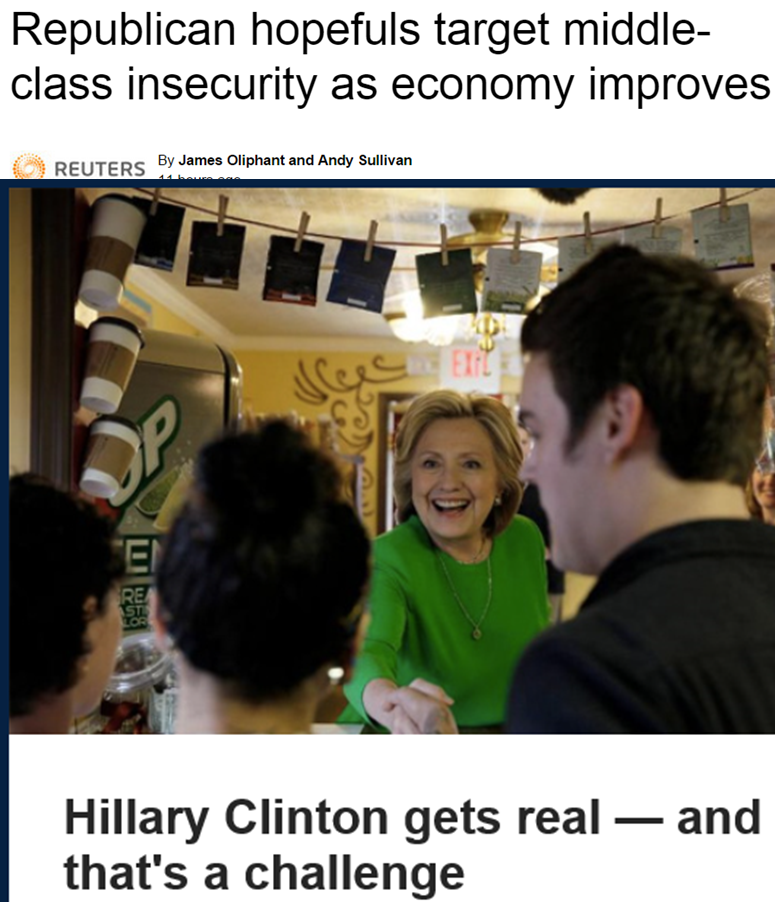 It’s fascinating to watch republicans use their economic failings as weapons against Democrats by shifting the blame. For instance their own deregulation nightmare…the Great Recession:

Republican presidential candidates are trying tap into a lingering sense of insecurity among Americans seven years after the global financial crisis.

Their refusal to raise the minimum wage, even suggesting we get rid of it altogether:

And some are striking a sympathetic tone with lower-income workers…

Praise from GOP marketing word smith and spin-meister Frank Luntz for playing up the negative effects of the GOP’s free market failure - the Great Recession:

Stupidly pointing out the drop in new business formation that started, and I’m not kidding, during the Reagan years. They do know we can hear them say these things?

Bush would like to see the economy hum at closer to 4 percent and frequently points out that the rate of new business formation has dropped steadily since the 1980s and that business deaths now eclipse starts.

Cry alligator tears over all the massive corporate tax cuts they passed out and continue to this day:

Many in the comments section were also in complete disbelief:

“More of those I've heard want to eliminate or not raise the minimum wage, privatize (read, "make inoperative") Social Security, get us into more expensive (in both money and the lives of our young soldiers) wars, raise the age for retirement, and cut funding for public schools than want to do ANYTHING for anyone outside the 1%.”

“Once in office we are their target for scorn, ridicule and as a source of money that they can take from us to give to the military/industrial complex and their plutocrat friends.”

“Republican "trickle on" theory didn't work, giving big business massive tax breaks didn't work, cutting working American's benefits and retirements didn't work nor did removing regulations that resulted in the meltdown in real estate and loansharking. However, a small percentage of the population has made enormous gains due to their policies.”