Leave it to Bloomberg Business to take a more critical look at Scott Walker's claims of frugality and almost laughable lie, “I believe people create jobs, not the government.” The way he's doled out corporate welfare checks from the Wisconsin Economic Development Corporation, without having them pee in cup, is an open admission he's just bullshitting us.

Like the title above states, Walker's closet full of free sweaters are compliments of another handout using taxpayer money: 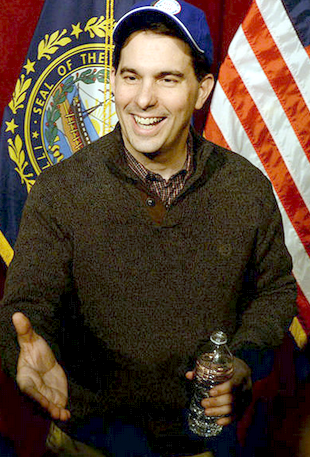 Wisconsin Governor Scott Walker can’t stop talking about Kohl’s as he crisscrosses the U.S. before a likely presidential run. “The next thing you know, they’re paying me to buy that shirt,” Walker told an audience Saturday evening in New Hampshire.

What Walker doesn't mention is his biggest interaction with the third-largest U.S. department store chain: a state incentive package worth as much as $62.5 million. The credits, offered in 2012 when there was a chance the company would relocate to another state, arrived despite Walker’s limited-government philosophy. “I believe people create jobs, not the government,” Walker said in that same New Hampshire speech.