The National Rifle Association will hold its annual convention April 10-12 in Nashville. Here's a breakdown of what you need to know:  "16 acres of guns," according to an ad for the event; All guns on the convention floor will be nonoperational, with the firing pins removed, and any guns purchased during the NRA convention will have to be picked up at a Federal Firearms License dealer…

Media Matter's hit the nail on the head by throwing the NRA's own talking points back at them. Funny, gun hobbyists have not yet responded to this obvious hypocrisy:


NRA To Host "Marquee" Event In A "Gun-Free Zone" After Describing Such Places As Advertisements For An "Insane Killer" - NRA's Wayne LaPierre Recently Fear-mongered About Terror Attack On Gun-Free Mall.

At the same time, new research is backing up what has been painfully obvious to many of us; guns kill people, and don't make us safer. What a revelation...from MotherJones:

Anyone familiar with the gun debate has heard the talking points of the National Rifle Association and other gun rights advocates: "Carrying a gun for self-defense makes you safer." Or: "If only more ordinary citizens were armed, they could stop mass shootings" ... these arguments don't stand up to scrutiny. After the massacre at Sandy Hook Elementary School, David Hemenway, director of the Harvard Injury Control Research Center, commented on another long-running assertion from the gun lobby: "There is no evidence that having more guns reduces crime," he told the New York Times.

Here's a little background, and a graph showing some of their findings:


Hemenway says that some in the media have continued to treat such assertions as legitimate points of debate. That leaves the public thinking, "Okay, so there's disagreement on this," he says … so he set about surveying a wide range of experts on guns. The Harvard team has completed nine surveys so far, with about 100 researchers responding to each: They show that a clear majority of experts do not buy the NRA's arguments (see the growing dataset here). 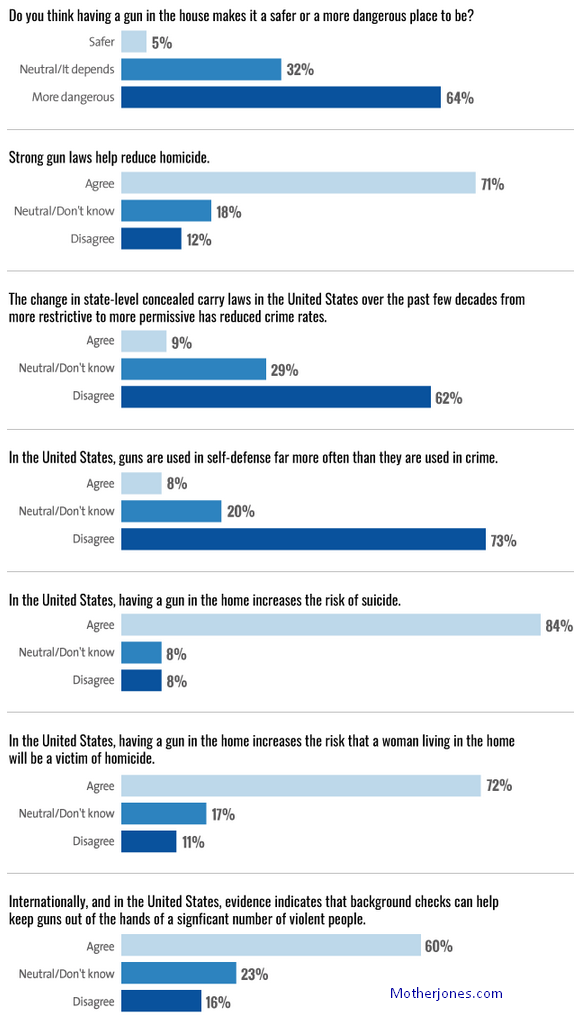