In a block bust discovery: The Nation's Ari Berman reported that Scott Walker's plan to provide a quick voter IDs to those who don't have a birth certificate still wasn't up and running yet. So US District Judge James Peterson immediately stepped it: 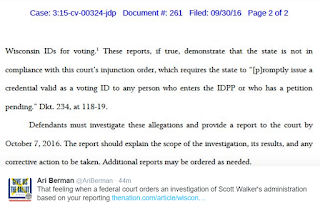 WSJ: Judge orders state to probe report that DMV gave false information on voter ID: Judge James Peterson's order followed a report this week by The Nation that cast doubt on whether Gov. Scott Walker's administration is following a judge's instructions in a court challenge to the state's voter ID law.

I know, it seems crazy to have the state (fox) investigate itself (the hen house) over defying a court order to provide these ID credentials for at least the upcoming election:

The Nation report featured recordings of exchanges with DMV employees that appear to thwart efforts by a homeless man to obtain an ID to vote in the November election.

Peterson, who is presiding over one of two pending legal challenges to Wisconsin's voter ID law, ruled in July that the state must promptly provide voter ID credentials, valid in the November election, to people who request them -- even if they lack some of the underlying documents needed to obtain an ID.

"These reports, if true, demonstrate that the state is not in compliance with this court’s injunction order" from July, Peterson wrote. "The report should explain the scope of the investigation, its results, and any corrective action to be take.”.

Peterson's order instructs the state to "investigate these allegations and provide a report to the court by Oct. 7." 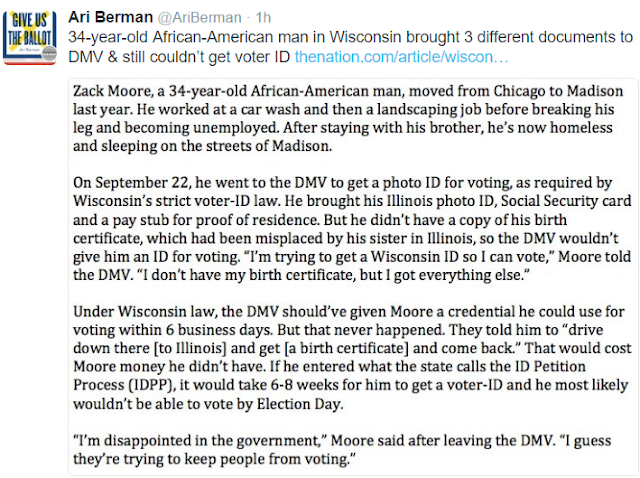 "It Just Takes Time:" Admit it, Walker never had any intention of following through on his plan to provide voter ID's until after the election, whether he got caught or not:

Molly McGrath, the national campaign coordinate for VoteRiders, which helps people get voter IDs, accompanied Moore to the DMV and recorded the trip. Read this exchange between her and DMV employees:

Molly: If you initiate the petition process do you get an ID for voting?

DMV Employee 1: No, you don’t get anything.

DMV Employee 2: No, you don’t get anything right away.

Molly: Ok, so even if we start the petition process, and it takes eight weeks, he wouldn’t be able to vote.

DMV Employee 2: Well, I don’t know, they’re working on that. It’s kind of up in the air right now.

Molly: I thought you could get an ID, like the sign says over there: “No birth certificate, no problem.” You can get an ID to vote.

DMV Employee 3: You can. It just takes the time.

Molly: So even if we just start the petition process, he wouldn’t get anything temporarily that says you can vote?

Here's Zack Moore,in his own words: