Listening to radio announcers and TV pundits analyze the content of Hillary Clinton’s speeches and policy details ignores the fact that we’re comparing something…to nothing. 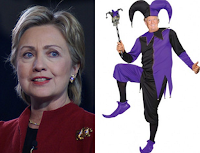 We think we’re so smart discussing the issues, like there are two sides to compare.

Instead, what we have is an actual political candidate standing next to...a court jester. And we seem oblivious to just how absurd this whole thing really is.

In what’s turning out to be a real life version of the movie “Idiocacy,” for gods sake, Trump the "candidate" spews nothing but shear lunacy:

Trump had a combined 53% False rating, and we're not even including Mostly False. Wow, and Hillary's the "liar."

It's called "puffing," and that is the official term that legally protects salespeople and businesses from making boastful claims about their products and services that no one really expects to be provable by empirical facts …(like) Budweiser calling itself the "king of beers." Trump's natural state is building up his brand and properties in a way that would make a used car salesman blush. The public is used to it and accepts it just as we accept that used car salesman boasting about the 2005 SUV he's pushing.

And Trump is helping achieve this result by making sure he maintains his salesman's image for as long as possible. Every time Trump mixes his salesman persona into the political arena he immediately puts himself into that less scrutinized salesman's role. It's why he gave the news conference at his new golf course in Scotland, it's why he talks so much about how he's still running his businesses, and it's why he launched his campaign from Trump Tower.

Hillary Clinton's one and only image in the public mind is that of a politician. We don't look at her in any other context. Not only are politicians held to a higher truth-telling standard than salespeople, we don't even focus on their policies all that much to balance what they say. For the most part, politicians are what they say and salespeople are what they sell. It's the best way to understand why Trump gets away with some much of what he says. Ultimately, that's not his product.

Compared to the tough scrutiny his fellow Republican candidates and Clinton endure, the salesman standard is better. And that's why people like John King are getting played and they don't even know how much they've been played. Political reporters are not like financial journalists or consumer watchdogs, and they're certainly not experts in psychological warfare. This is why they not only don't understand Trump's appeal, it's why all their efforts to scrutinize and fact check him out of the race have failed.

You have to check out the TV series "BrainDead," with reruns on Amazon Prime and OnDemand. The show plays on today's politics, featuring clips of both Clinton and Trump, along with ant-like aliens that destroys peoples brains turning them into stark raving Republicans.