Just a short recap, before getting into the latest paid to play revelation. This isn't just gotcha politics, it's caughtcha politics. He's so crooked: 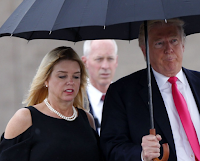 This latest revelation (below) adds to the “pay-to-play” rumors swirling around Trump’s foundation’s Sept. 2013 donation to a political committee backing Bondi’s reelection. The gift, which Bondi personally solicited, was granted just four days after she announced that she might join the New York state attorney general’s fraud probe into the now-defunct Trump University. She ultimately declined to pursue the investigation, though Florida residents had complained about being scammed by Trump’s real estate programs since 2011, two years before Bondi took office.

Q: So what were you hoping to get out of that donation?

Trump went on to say that he “never spoke to [Bondi]” about the donation. This appears to be contradicted by a statement from a Bondi aide named Marc Reichelderfer. The Associated Press reported in June that, according to Reichelderfer, Trump made the donation after receiving a personal phone call from Bondi.

Here are a few of Trump's tell-it-like-it-is admissions about donating campaign money:

-I will tell you that our system is broken. I gave to many people. Before this, before two months ago, I was a businessman. I give to everybody. When they call, I give. And you know what? When I need something from them, two years later, three years later, I call them. They are there for me. And that’s a broken system.

-These are not people that are doing it because they like the color of his hair, believe me. These are highly sophisticated killers. And when they give $5 million or $2 million or a $1 million to Jeb, they have him just like a puppet. They’ll do whatever they want. He is their puppet. Believe me.

Donald Trump not only donated $25,000 to the Florida attorney general weighing whether to investigate Trump University, but held a lavish fundraiser for her at his Mar-a-Lago estate in Palm Beach, according to a Huffington Post report … and he charged the Florida GOP just $4,855.65 for use of the resort. He has charged his own presidential campaign $140,000 to host events at Mar-a-Lago.

Whoa. Can you say "thank you" in any bigger way than that? Plus, you might have also noticed how Trump is making money from his own campaign spending...that's so presidential.

Rachel Maddow and Lawrence O'Donnell both offered this coverage: