Trump to "assimilate," make immigrants "love us," make people become American, and promote American Pride and Patriotism in our Schools. 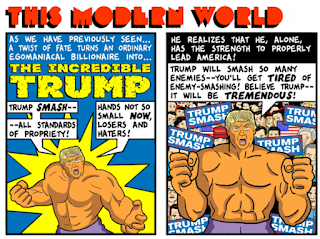 The Borg "use a process called assimilation to force other species into the Collective." Boy, that's sound freedom and liberty like, doesn't it? The Borg "symbolized in popular culture any juggernaut against which "resistance is futile."

Which brings me to the Incredible Trump. Framed the way it only can be framed, MSNBC laid down the marker below, and we have ourselves to blame for not heeding this warning.

In the words of Sinclair Lewis, "When Fascism comes to America, it will be wrapped in the flag and carrying a cross."


Trump: "We'll be united by our common culture, values and principles, becoming one American nation. One country, under one Constitution, saluting one American flag. And always saluting it."