Hey, we're getting a momentary break from another Trump word salad disaster that would have killed any other campaign instantly. Childcare: 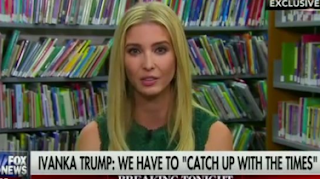 Donald Trump is scrambling to win over women voters with a child care plan.

Funny thing about Trumps plan; Republicans have always hated the idea, and won’t touch it, while Democrats have been trying to solve this “newly discovered” problem for decades, literally.

Hillary Clinton released her plan – which has been publicly available for a year prioritizes improving childcare quality with a plan to address chronically low wages and training for childcare providers.

Trump has put a new coat of paint on the same tired policies that prioritize wealthy people like himself at the expense of working families. Trump’s plan is mainly a tax deduction, which would allow parents to deduct the average price of child care from their taxes.

That sucks. But a tax credit deducts the child care costs right off your income, dollar for dollar, a UUUGh savings. It appears the Trump's missed the '70's and '80's:

Many low-income families don’t owe anything because they make too little and don’t qualify for credits that reduce or erase their burdens.

“We had a tax deduction until the late 70s,” Helen Blank, director of childcare and early learning at the National Women’s Law Center Blank said. “The deduction was made into a credit because a credit is more equitable. A low-income family can take advantage of a credit, especially if it’s refundable, which allows it to get money back at tax time even if it doesn’t have a tax liability” … wages and training for childcare providers.In the United States, the average cost of center-based child care for the typical working family with an infant and preschooler is about $18,000, a steep price for families to cover. If a family cannot afford child care, a tax deduction is irrelevant – a family can’t deduct something that they can’t pay for to begin with. The same flaw applies to the $1,200 rebate … A credit of $1,200 would be perfect if the goal was to help families afford childcare for a month, not a year.

Hillary Clinton zeros in on the issue of affordability. Clinton’s plan aims to ease the financial strain of childcare for all families by capping costs at 10% of household income, while also increasing wages for childcare providers.

And we haven't even gotten into the family leave debate, which isn't a big Republican favorite either.