Trump went beyond “raising questions,” appearing to have kill an investigation of Trump U in Florida by donating money to the states AG. Has anyone doggedly pursued this? Nope.

Look, after finding out Clinton emails did not have “Confidential” stamped on the top of them like
you see in the movies, but did have an unexplained confusing parenthetical “c” included in the text, it does “raise questions” about why we're still talking about this.

Conservative author Norm Ornstein took a closer look at this, after a Trump pay-to-play story just hit the fan in Florida. It appears Trump’s problems, often much bigger than Clinton’s, never seem to raise the same kind of questions. WaPo: 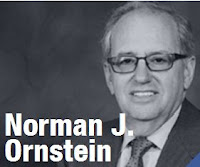 Whenever some new piece of information emerges about Hillary Clinton or people close to her, we’re told that it “raises questions” of some kind … stories about Donald Trump that don’t have to do with the latest appalling thing that came out of his mouth don’t “raise questions” in the same way.
Judicial Watch, which is an organization established in the 1990s to destroy Bill and Hillary Clinton, latest “revelation:” email exchanges between Doug Band, an executive at the Clinton Foundation, and Hillary Clinton’s aide Huma Abedin, when Clinton was secretary of state. 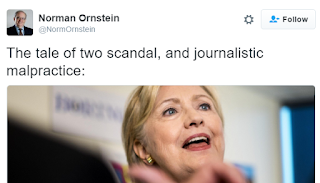 And this story proves Clinton's claim, no question, right? The NY Times continues to think it "raises questions."

I hope your sitting down, because Trump’s latest questionable actions are jaw dropping. But will they "raise questions," along with months of investigative journalism? Probably not, since this about a simple "clerical error?" The WaPo article continued:

Yesterday we learned that Donald Trump paid the IRS a $2,500 penalty over a contribution his foundation made to a PAC affiliated with Florida attorney general Pam Bondi. Does this story “raise questions”? Does it ever.

In 2013, Bondi’s office received multiple complaints from Floridians who said they had been cheated out of thousands of dollars by a fraudulent operation called Trump University. While Bondi’s office was looking into the claims to determine if they should join New York State’s lawsuit against Trump University, Bondi called Donald Trump and asked him for a contribution to her PAC.

Now let’s pause for a moment to savor the idea that Bondi, the highest-ranking law enforcement official in the state, would solicit a contribution from someone her office was in the process of investigating. She did solicit that contribution, and Trump Foundation came through with $25,000, which is an illegal contribution.

Trump’s people say this was just a clerical error … But days before getting the check, Bondi’s office announced that they were considering whether to go after Trump University, and not long after the check was cashed, they decided to drop the whole thing.

Outrageous right? But does it “raise questions?”

Here are a few questions this story raises: How many Floridians were scammed by Trump University? When Bondi and Trump spoke, did Trump University come up? What was the basis on which Bondi decided not to join New York’s lawsuit? Why didn’t she recuse herself from the decision? Are there any other attorneys general Trump has given money to, and had any of them received complaints about Trump University, the Trump Institute, the Trump Network, or any of Trump’s other get-rich-quick scams that were so successful in separating ordinary people from their money?