With the "Basket of Deplorables Party" in charge of 30 U.S. states, with almost six years in control of the House and a couple of years in the Senate (obstructed everything before that), it's still amazing to hear them complain about the Democrats being in charge (see below). I'm sorry, what...? According to Rep. Paul Ryan:

“In more and more areas of American life, President Obama has given government the starring role and pushed the people into the wings. He might consider this a success, but here's the true measure of progressivism: After eight years of it, the vast majority of Americans say we're on the wrong track.”

Whoa, it's still the Democrats fault, despite the "Basket of Deplorables Party" inability to agree on policy between the House and Senate?

The End Game: One Party Dictatorship: That's not an exaggeration either, after listening to the Trump party economic team, headed up by right wing loon Stephen Moore. I edited together his to-do list for Trump, who might eventually roll out this extremist one party agenda, reversing everything the even remotely smells of liberalism.

UPDATE 9/15/16: Here's a link to Trump himself bragging about the cuts and breakdown of government oversight of the environment and business.

Just imagine Democrats making these same declarations. Oh, and believe it or not, more unaffordable tax cuts that increased the debt they hate so much:


1. "We are going to present the biggest tax cut...and it's going to be a supply side thing, and I just get that off my chest."

2. "I just don't think that income inequality will work this time for the Democrats...the biggest problem they have with that narrative, is that they've been in charge for the last 8 years."

3. "If we had had the kind of recovery we had under Reagan under Obama, we'd have $3.5 trillion GDP this year." (see the effect of austerity in the graph below vs Reagan spending, big  surprise) 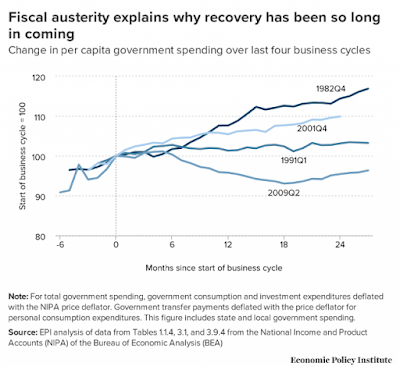 Boy do Republicans hate moving into this century developing new and better sources of energy:


4. "If we get this right, and we promote American energy, and I'm not talking about building windmills, I'm talking about using our coal, our oil and our natural gas and nuclear power..."

5. "I think Donald Trump has a great chance to go these industrial unions and say, 'I'm the one who wants to expand the jobs for your unions, it's these lunatics over here like Tom Snyder and Hillary Clinton who want to put you out of business."

Nice to know conservative special interests would be taking over our courts:


6. "One of the big concerns, has always been, who he was going to put on the Supreme Court...I want to allay your concerns, if you look at those 11 people that he...you know suggested, those were all people suggested by the Federalist Society and the Heritage Foundation. So you can't much better than that..." "We could have the most conservative court in history."

7. "...it's the people he (Obama) had put in these institutions, whether it's the FDIC, or the FDA, or the IRS. He has infiltrated every single agency with hardcore anti-business leftists..."

As we all know, liberals are the enemy of the state.

Moore touts the wonders of bankruptcy under Trump. Oh, remember how horrible it was when Obama took a chance and invested in Solyndra, just before it went bankrupt? Oh, never mind.


8. "When the left attacks him for bankruptcies for example, ah, it really signifies they don't know the first thing about business...you learn a lot from your failures, right? Failures essential for innovation and growth."

9. "Our school system is a total abomination...what I told Donald Trump was just take the $50 billion in the Dept. of Education budget and let's give 10 million $5,000 vouchers to the lowest income people in America."

10. "And when Obama says you didn't build that, and Hillary Clinton says that business don't create jobs, didn't create jobs, that kinda that whole attitude of being anti-business is sucking the lifeblood out of our economy."